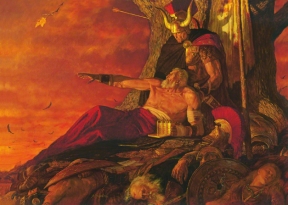 It appears Mormon may have had a hero from the history of his people.

At a time he was witnessing the destruction of his people because of their wickedness, he compiled the records that we know as the Book of Mormon.  As he moved from one set of records to another, he wrote a short treatise explaining his reason for doing so.  In the process, he introduces King Benjamin to the reader.  He begins by sharing that King Benjamin had contentions among his people and that the armies of the Lamanites came to battle against them.  However, the King gathered his people together, and they fought in the strength of the Lord and drove the Lamanites back to their own lands––with King Benjamin leading them with the sword of Laban.  (Words of Mormon 1:12-14).  This King was someone Mormon respected and looked up to as an example as he led the Nephite army in to battle. (Mormon 2:2)

The contention among King Benjamin’s people, caused by false prophets and teachers, resulted in dissensions and crime—wickedness had destroyed the peace among his people.  But King Benjamin, being a holy man, with the assistance of the holy prophets, did teach the people with great power and with authority.  (Words of Mormon 1:15-17)  “By laboring with all the might of his body and the faculty of his whole soul, and also the prophets, did once more establish peace in the land” (Words of Mormon 1:18).

For the “fruit of the Spirit is love, joy, peace, longsuffering, gentleness, goodness, faith” (Galatians 5:22).  Mormon desired nothing less for his own time, but it was not to be.  We should not be surprised that Mormon introduced this great man to us, and then recorded his entire speech to his people at the beginning of the Book of Mosiah.  Perhaps King Benjamin was indeed one of Mormon’s heros.

The scriptures declare that King Benjamin was a great leader and teacher of his people.  Yet, he was humble and wanted to serve his people to the utmost of his abilities.  Perhaps the words of his forefather Nephi that “all are alike unto God” (2 Nephi 26:33) had touched his soul.  His life was a testimony of those words, for he served his people his entire life and even labored with his own hands so that taxes would not be needed.  He judged righteously and strove to teach righteousness instead of confining sinners to dungeons.  He knew that when he served his fellow beings, he was only in the service of his God. (Mosiah 2:16-17) He also knew that he could serve God with his whole soul all his days, and still be “indebted unto him . . . forever and ever” (Mosiah 2:24).

Because of his righteousness (Mosiah 3:4), an angel from God came to King Benjamin to teach him “glad tidings of great joy” (Mosiah 3:3) for him and for his people.  For the Lord Omnipotent would soon come to earth to provide salvation for his people. “And he shall be called Jesus Christ, the Son of God . . . he cometh unto his own, that salvation might come unto the children of men even through faith on his name” (Mosiah 3:8-9).

“And the Lord God hath sent his holy prophets among all the children of men, to declare these things to every kindred, nation, and tongue, that thereby whosoever should believe that Christ should come, the same might receive remission of their sins, and rejoice with exceedingly great joy” (Mosiah 3:13).

This is the message that I, as a missionary, shared with the people of New Zealand.  This is the message that thousands of missionaries—past, present, and future—to go into the world.   Not with pride or arrogance, but in the spirit of service and love to our fellow beings.  Instead of a tower, we go from home to home, teaching “glad tidings of great joy” to all who will listen to our testimonies.

This is why we serve each other in our individual callings in the Church.  We labor to teach the truth, “that salvation was, and is, and is to come, in and through the atoning blood of Christ, the Lord Omnipotent” (Mosiah 3:18).

Because of the fall of Adam, every person born on this earth is born a “natural man” and is therefore “an enemy to God” (Mosiah 3:19).  Every person is born with “a thorn in the flesh” (2 Corinthians 12:7), as Paul described it, or a “weakness” (Ether 12:27-28) as Mormon wrote.  The purpose of thorns and weakness are to keep us humble and turn us to Christ—our hope and salvation.  As we are all sinners, and a single sin can keep us from returning to the presence of our Father, who is to judge one thorn from another’s weakness.  Isn’t all sin abominable to the Lord?  Are we not all indebted to our Savior, Jesus Christ?

We have a habit in the Church of categorizing sin–or the rationalization of our sins compared to anothers–in order to help us feel better about ourselves or justify our actions towards another person.  “Why beholdest thou the mote that is in they brother’s eye, but considerest not the beam that is in thine own eye?” (Matthew 7:3).  Alma said it this way, “only let your sins trouble you, with that trouble which shall bring you down unto repentance” (Alma 42:29).

May each of us yield “to the enticings of the Holy Spirit, and putteth off the natural man and becometh a saint through the atonement of Christ the Lord, and becometh as a child, submissive, meek, humble, patient, full of love, willing to submit to all things which the Lord seeth fit to inflict upon him, even as a child doth submit to his father” (Mosiah 3:19).  Perhaps then, it will be said of us, “And now there was no more contention in all the land” (Mosiah 1:1), and that by sharing the testimony of Christ’s atonement, with charity, to the world, we can “once more establish peace in the land” (Words of Mormon 1:18).