“And His Name Shall Be Called after Me” 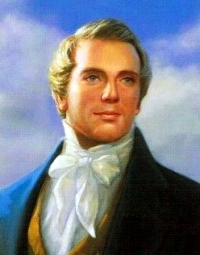 Brigham Young once taught, “What has been said to you? What has been said to me? If we will preach this doctrine, the people almost universally will follow us and say, ‘Don’t mention Joseph Smith—never mention the Book of Mormon or Zion, and all the people will follow you.’ I said, It would not do them any good, if we were to listen to their requirements. What I have received from the Lord, I have received by Joseph Smith: he was the instrument made use of. If I drop him, I must drop these principles . . . If I lay down the Book of Mormon, I shall have to deny that Joseph is a Prophet” (Journal of Discourses, 6:279).

He continued, “Did not your hearts use to tremble dreadfully, you old Elders in Israel, when you had to preach in new places? You would take up the Bible and quote Scripture from Genesis to Revelations, so as to surprise the people, and did not mention Joseph Smith. Did it not make you tremble, when you had to say that Joseph Smith was a Prophet—-when you came to that point, and were obliged either to deny or to own him before the people? . . . The Elders of Israel especially feel the prejudices of the people bearing down upon their spirits; but when they once open their mouths and say that Joseph is a Prophet, such a flood of light at once comes upon them, that they are ready to ask no odds of all the world. But in preparing to make this declaration, their hearts tremble and their knees smite each other, almost like Belshazzar’s” (Journal of Discourses, 6:280).

President Young then shared this story of an Elder he knew. “After he was baptised, [he] got cornered up, and was obliged to preach a sermon. He never had been able to say that he knew Joseph was a Prophet; but he was there in the meeting: the house was crowded with the congregation; the windows and doors full of people, and all around on the green waiting to hear a ‘Mormon’ preacher.

There were none there but this one man, and he was called upon to preach. He thought he would pray and dismiss the meeting. He never had known that Joseph Smith was a prophet: that was the lion that lay in his path; and he could not get by him, nor round about him, nor dig under him, nor leap over him; and the lion he must meet: he must say Joseph, for better or worse. As soon as he got ‘Joseph’ out, ‘is a Prophet’ was the next; and from that, his tongue was loosened, and he continued talking until near sundown. The Lord pours out his Spirit upon a man when he testifies that which the Lord gives him to testify of. From that day to this, he has never been at a loss to know that Joseph was a Prophet” (Journal of Discourses, 6:280).

While there are many who enter missionary service knowing Joseph Smith is a Prophet of God, there are thousands of young missionaries who enter the mission field who want to believe what they have been taught about the Prophet Joseph Smith to be true, but just aren’t completely sure. Some find their answer in the Missionary Training Centers that dot the world.

The zeal that comes from a burning testimony is witnessed by many who see a visible change that comes over them while in the MTC. However, there are others who still don’t know for sure as they enter the field already to harvest. But they walk with faith, with understanding, with the seedling of testimony in their hearts. They study the scriptures, pray, and courageously knock on that first door every morning.

Then the moment comes, just as Brigham Young taught, when the missionary begins to teach about Joseph Smith, when he is to testify that Joseph was indeed a Prophet of God, the Spirit is poured out and they know! They know Joseph talked with the Father and His Son, Jesus Christ! They know he translated the Book of Mormon through the power of God! They know the gospel they teach is indeed the true and everlasting gospel! It’s all true! The patiently nourished seedling has become the tree—-reaching to the heavens and into eternity.

Everyone who is a Latter-day Saint must at sometime in their life come to understand that Joseph Smith is a Prophet. Everyone must nourish the seed of testimony. Because of His great love for us, our Father in Heaven will choose His own way, through the Spirit, to best touch our hearts and minds with the truthfulness of the prophetic calling of Joseph Smith. This moment is personal and life changing. It is the motivating force behind the actions of a true Latter-day Saint. Because we know Joseph, we come to know and understand the Savior’s love and plan for each of us.

The seed of testimony was placed in my soul by my parents, through testimony and example. The years of Primary, Family Home Evenings, and even thinning sugar beets at the welfare farm, began to nourish the seed, encouraging it to grow and sink its roots deep into the soil of truth. My family vacation to Nauvoo the summer I was twelve, strengthened the roots and pushed the stem through the soil into the sunlight. Personal study, the year I was fifteen when we moved to Nauvoo, sent the seedling reaching ever higher. I grew to love the man affectionately known as brother Joseph. Mission experiences, among the wonderful people of New Zealand, continued the growth of roots and branches.

Life, with its journey through valleys and mountain peaks, endeared my heart to the man who experienced his own valleys and peaks of life. Through my imperfections, like Joseph, I continue to learn, grow, and increase in my desires to do the will of the Lord. He is a Prophet-Hero, worthy of respect and emulation.

I join my testimony with the millions who have lived and who are living on this earth, that Joseph Smith is indeed a Prophet of God. The Book of Mormon was translated by the gift and power of God. The gospel he restored to earth, with its principles, covenants, and promises, is indeed, the true gospel of Jesus Christ. Priesthood authority and power was restored through him. His teachings will change and bring peace to this troubled world. “Joseph Smith, the Prophet and Seer of the Lord, has done more, save Jesus only, for the salvation of men in this world, than any other man that ever lived in it” (Doctrine and Covenants 135:3).