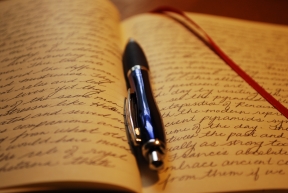 On February 27, 1835, Joseph Smith had a meeting with the Twelve Apostles at his home in Kirtland, Ohio.  After the meeting opened with prayer, Joseph began to “lay before the council an item which would be of importance.”  The Prophet then outlined the importance of keeping records in the Church and in our personal life.  Joseph “had for himself, learned a fact by experience, which, on recollection, always gave him deep sorrow.  It is a fact, if I now had in my possession, every decision which had been had upon important items of doctrine and duties since the commencement of this work, I would not part with them for any sum of money; but we have neglected to take minutes of such things, thinking, perhaps, that they would never benefit us afterwards; which, if we had them now, would decide almost every point of doctrine which might be agitated.  But this has been neglected, and now we cannot bear record to the Church and to the world, of the great and glorious manifestations which have been made to us with that degree of power and authority we otherwise could, if we now had these things to publish abroad” (Teachings of the Prophet Joseph Smith, p. 72).

Joseph then challenged the newly formed Council of Twelve Apostles to keep a record of all their proceedings and decisions for future purposes.  “An item thus decided may appear, at the time, of little or no worth . . . and one of you lay hands on it after, you will find it of infinite worth, not only to your brethren, but it will be a feast to your own souls. . . . for neglecting to write these things when God had revealed them, not esteeming them of sufficient worth, the Spirit may withdraw, and God may be angry; and there is, or was, a vast knowledge, of infinite importance, which is now lost” (Teachings of the Prophet Joseph Smith, p. 73).

Amaleki records an important event in Nephite history.  The King of the Nephites, Mosiah, was a righteous man.  A man of God, who, seeing the wickedness of his people, turned to the Lord for guidance.  His answer came as a warning to “flee out of the land of Nephi” with the righteous people that would follow him.  We again see the exodus pattern of the Book of Mormon introduced with Lehi leaving Jerusalem.  The righteous remnant of Nephi gathered together and followed their king.  One of the righteous people was Amaleki who “was born in the days of Mosiah ; and I have lived to see his death; and Benjamin, his son, reigneth in his stead” (Omni 1:23).  Amaleki brought with him the records he had been given by his father and which contained many of the teachings of the prophets among the people of Nephi.  Mosiah brought with him the record of the history of the people.  With these records and with the Spirit of the Lord, “they were led by many preachings and prophesyings [and] . . . were admonished continually by the word of God” (Omni 1:13) and being led by the power of God, they “came down into the land which is called the land of Zarahemla” (Omni 1:13).

The people of Zarahemla rejoiced at the arrival of the remnant of Nephites to their land.  Their ancestors had fled Jerusalem not long after Lehi and his family, being brought by the Lord to a different area of settlement.  (Omni 1:15-16)  They had become a mighty people, but because they had not brought any records with them, “their language had become corrupted . . . and they denied the being of their Creator” (Omni 1:17).  They rejoiced when they saw the plates of Brass containing their history (Omni 1:14), for they now could learn from an original source the traditions that had been forgotten among their people.  With only an oral tradition of their history, they could not “bear record . . . of the great and glorious manifestations which have been made . . .[and] neglecting to write these things when God had revealed them, not esteeming them of sufficient worth, the Spirit [had] withdraw[n] . . . [and] a vast knowledge, of infinite importance . . . [was] now lost” (Teachings of the Prophet Joseph Smith, p. 72-73).

Zarahemla, their leader, “gave a genealogy of his fathers, according to his memory” (Omni 1:18), and it was finally recorded as correctly as possible.  With the records of the Brass Plates and the Plates of Nephi, the people of Zarahemla learned their ancient language, traditions, and religion.  The righteous remnant of the Nephites now had a large group of people to that needed to be taught the fulness of the Gospel and the coming of Jesus Christ using the evidences from their records.  They were prepared in the school of opposition in the land of Nephi for a great work among the people of Zarahemla.  A portion of scattered Israel had been gathered back to the fold of God.  It was to the descendants of these two groups of people, joined together as one nation, that King Benjamin, Mosiah’s son, would deliver his great discourse at the end of his life.

We learn two things from this story recorded by Amaleki in the Book of Omni.  First, the records of God’s Church will remain with the righteous remnant of the Lord’s people.  Second, records are important to the continuation of righteousness and civilization.  Historical records help us to understand how we, as a people, arrived where we are and the lessons learned by our fore bearers.  Records are witnesses of the truth–who we are, where we came from, where we are going–and bear testimony of the Savior.  Witness the final testimony of Amaleki recorded at the end of Omni, “And now, my beloved brethren, I would that ye should come unto Christ, who is the Holy One of Israel, and partake of his salvation, and the power of his redemption.  Yea, come unto him, and offer your whole souls as an offering unto him, and continue in fasting and praying, and endure to the end; and as the Lord liveth ye will be saved” (Omni 1:26).

May we gain a testimony of the importance of our own personal records in our lives—our journals, diaries, and histories—that we may bear witness “of the great and glorious manifestations which have been made to us” and not to neglect “to write these things when God had revealed them . . . esteeming them of sufficient worth, [so that] the Spirit [will not] withdraw” (Teachings of the Prophet Joseph Smith, p. 72-73), and that they “will be a feast to your own souls” and to the souls of those yet unborn.