”Because of Their Love Towards Their Brethren” (Alma 26:32) 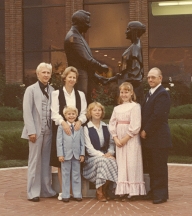 From 1976-1982, my father worked for the Temples and Special Projects Department of the Church in Nauvoo restoring some of the buildings that are now open for members of the Church to tour in that beautiful city on the banks of the Mississippi River.  My father and his crew would restore the buildings and then they would be turned over to Nauvoo Restoration, Inc. to maintain and manage.   While my father worked directly for the Church, Dr. LeRoy Kimball was President of Nauvoo Restoration.

The summer I was eighteen I had the opportunity of working with my father in the restoration of the James Ivins/John Taylor home.  One day Dr. Kimball, who was an older man long retired from his medical practice, and who was experiencing some of the issues that sometimes come with old age, came into the entranceway of the Ivins/Taylor home and asked for my father.  I went to get him. I was working in the room just to the south of the front doorway within sight and hearing range.  As my father approached, Dr. Kimball began to express some frustrations in what I felt was an inappropriate manner.  I stood there and watched him yell at my father and my father just stand there and listen-not saying a word.

As Dr. Kimball finished his outburst, my father told him he would look into it and the conversation ended.  I was angry at the way he had treated my father.  As Dr. Kimball left out the front door, I walked up to my father and asked him why he didn\’t stand up to Dr. Kimball? Why did he allow him to yell at him and treat him like that?  Calmly, he replied something to the effect, \”He\’s not my boss.  I will call Salt Lake and let them know what happened, and they can handle it.  I will just do my job and let them handle Dr. Kimball.\”  It was a wonderful lesson for a young eighteen-year-old.  I was amazed at how well my father handled the situation and kept it from expanding into a greater confrontation.

In 1842, a few blocks down Main Street from the Ivins/Taylor home in Nauvoo, the Prophet Joseph Smith, speaking to the Relief Society, stated, \”Suppose that Jesus Christ and holy angels should object to us on frivolous things, what would become of us?  We must be merciful to one another, and overlook small things. . . . Nothing is so much calculated to lead people to forsake sin as to take them by the hand, and watch over them with tenderness.  When persons manifest the least kindness and love to me, O what power it has over my mind, while the opposite course has a tendency to harrow up all the harsh feelings and depress the human mind.  It is one evidence that men are unacquainted with the principles of godliness to behold the contraction of affectionate feelings and lack of charity in the world.  The power and glory of godliness is spread out on a broad principle to throw out the mantle of charity\” (Teachings of The Prophet Joseph Smith, p. 240).

Rarely was contention found in my home.  My parents taught that contention and anger were wrong, that it showed a lack of respect, civility, and love for Heavenly Father\’s children.  I was raised with the understanding that it was better to turn the other cheek, better to show kindness and love, than to take part in an angry exchange of words and actions.  (Mosiah 4:14-15) While our home was not perfect, I feel, as a family, we tried to live the words of President Howard W. Hunter when he taught, \”To reach success in the family, parents must have love and respect for each other.  Husbands, the bearers of the priesthood, should hold their wives in the highest esteem before their children, and wives should love and support their husbands.  In return, the children will have love for their parents and for each other.  The home will then become a hallowed place where the principles of the gospel can be best lived and where the Spirit of the Lord can dwell\” (The Teachings of Howard W. Hunter, p. 156).

President Gordon B. Hinckley, in his best selling book \”Standing for Something,\” stated, \”We are sons and daughters of God, each a member of the divine family.  As surely as He is our father, we are all brothers and sisters.  We simply must work unitedly to remove from our hearts and to drive from our society all elements of hatred, bigotry, racism, and other divisive actions and words that limit a person\’s ability to progress, learn, and be fully accepted.  Snide remarks or racial slurs, hateful epithets, malicious gossip, and mean and vicious rumor-mongering have no place among us. . . . Imagine how our own families, let along the world, would change if we vowed to keep faith with one another, strengthen one another, look for and accentuate the virtues in one another, and speak graciously concerning one another.  Imagine the cumulative effect if we treated each other with respect and acceptance, if we willingly provided support \” (Standing for Something, p. 49-50).

As is often taught in the world today, Korihor, an anti-Christ, taught the people of Zarahemla in his day a form of humanism, that \”every man fared in this life according to the management of the creature; therefore every man prospered according to his genius, and that every man conquered according to his strength\” (Alma 30:17), thus removing any belief in the brotherhood of mankind and the need to show kindness to others.  Every man for himself. Raising yourself on the backs of others was natural and required for success. The goal is power, influence, and wealth, and anything to move you towards \”more\” is acceptable.  For \”whatsoever a man did was no crime\” (Alma 30:17).  There is ample evidence of this lifestyle in the so-called western Christian world, and particularly in the United States, today.

I once was in Washington D.C. on business and rode the mass transit system from my hotel to the convention center.  Perhaps it was because I was in an unfamiliar place, out of my own routine, but as I looked around at the other passengers I was amazed at the feeling I perceived coming from them.  I may be reading more into what I was seeing than what was really going on, but it seemed I was on a car filled with angry and depressed people. I wondered what was going on in their lives that would cause them to emanate such feelings.  Was it their family life, or economic situation?  Was it their work place or were there other situations that caused such an overall sense of worthlessness and drudgery?  Where were the smiles, or any signs of contentment and happiness?  Where was the faith?

As we look around the world today, we can see the need for living the teachings of Jesus Christ and a stronger faith in Him.  We see emotional, physical, and psychological abuse and neglect found in many homes and then reaching out from there to work and school.  Often economic situations can cause neglect in the form of poor nutrition, hunger, sickness, and lack of health care.  Emotional stress can cause emotional victims of abuse in the form of name calling, being told you are worthless or stupid, or the call for stiffer penalties and punishment for even minor infractions.  From schools, work, or within the home, the elements of anger, contention, hatred, greed, and the lack of respect and civility, are placing limits upon individuals to reach the full potential of their creation as children of God.

The work of the Father is to bring to pass the immortality and eternal life of man. (Moses 1:39) If we desire to be \”called to the work\” and be part of the Father\’s eternal plan for His children, there are certain qualifiers that help us become more like Him as we serve Him in His work.  We must \”serve him with all [our] heart, might, mind and strength . . . And faith, hope, charity and love, with an eye single to the glory of God, qualify him for the work.  Remember faith, virtue, knowledge, temperance, patience, brotherly kindness, godliness, charity, humility, diligence\” (Doctrine and Covenants 4:2-6).

May we strive to live as He would have us live as we grow and progress on our path to exaltation.  May we desire to do the will of the Father, with faith in Jesus Christ, to help his children progress and reach their full potential.  May we take more seriously our temple covenants, that Zion might be established on the earth.