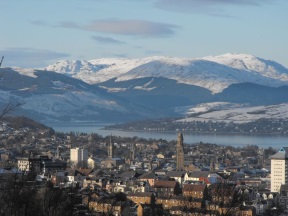 John Marsh served a mission in Scotland some 50 years ago. He loved his mission but felt he hadn’t made much of a difference. Like all missions, it was difficult and he struggled with the thought he hadn’t been very successful. He had only baptized one lady and her son. However, in 1999 his feelings about his mission took a dramatic turn.

Brother Marsh wrote, “On Sunday, September 5, 1999 I received the following e-mail: ‘Hello John, I hope that you are our Elder Marsh who confirmed Sheila way back in 1967 in Greenock, Scotland. We lived in Gourock at the time and would love to hear from you and to bring you up to date on our family. Regards Duncan Hotchkiss’”

Brother Marsh continues, “I sent Duncan an e-mail . . . I received this response a day later:

‘To begin at the beginning; you were serving with Elder Chandler, living in ‘digs’ with Mrs. Dalgleish not far from our home in Gourock. You taught our family the missionary discussions and my wife Sheila and older son, Alun, were baptized. . . . Daughter Mairi and younger son Graham were too young to be baptized and I was too thrawn (stubborn), being a science teacher and clinging to Darwinism although I hadn\’t studied that either. . . .

‘You were moved to another area but were kind enough to send me a book ‘The Faith of a Scientist’ by Professor Henry Eyring, father of the present member of the Quorum of the Twelve. . . . Two years after you moved, we moved to the north of Scotland to an area where the nearest branch was 60 miles away. Sheila felt to get her Patriarchal blessing which promised her that if she remained faithful her husband would take her to the temple to be sealed for time and all eternity. When she showed me this I thought ‘Chance will be a fine thing!’ . . . We moved back to Greenock again in 1974 and Sheila was able to resume full activity in Greenock Ward, serving in many callings including R.S. President and Primary President. . . . I attended Church most Sundays with the family but still would not accept baptism though many missionaries tried.

‘In 1978 we were living in central Greenock . . . Two sister missionaries gave me the discussions but when they tried to commit me for baptism one Friday night I told them it wasn\’t for me! They went away disappointed, although Sheila tried to cheer them up by telling them it would be all right. When Sheila went out for Sunday school . . . I stayed home to make lunch. She found the sisters very excited. They had arrived earlier and met a couple of strangers who introduced themselves as Dr. Henry Eyring and his wife. His first wife . . . had died and he had re-married. His second wife was a Greenock lady. . . . He was on his way to receive an honorary degree from the Sorbonne in Paris, France, and they had come by Greenock to visit her relatives.

The sisters knew that I had his book, thanks to your good self, and asked him if he had time to visit with me and talk to me! He visited with me for two hours and explained his point of view as a scientist. . . . He took the bible and gathered together between thumb and forefinger the pages dealing with the Creation. He told me that was what the bible had to say about the HOW of creation. The rest of the scriptures were about the WHY of creation. If it was important for our salvation to know about the HOW the Lord would have given the information. He said, ‘I guess that\’s part of what we\’ll learn in the eternities.’ That made sense to me and I committed to be baptized.

But Satan doesn\’t give up easily. I was starting to waver again before my baptism when I found a scripture written on a scrap of paper on the table in the foyer of the Church meetinghouse. . . . I like to think of it as my second personal miracle. It quoted Proverbs 3: 5 – 6: ‘Trust in the Lord with all thine heart; and lean not unto thine own understanding. In all thy ways acknowledge him, and he shall direct your paths.’ I realized only then that faith was essential to spiritual progress. I was baptized on 28 June, 1978, was ordained an Elder in September, 1978 and called to serve as Branch President in Greenock in February 1979 and later as Bishop (twice), on Paisley Stake High Council, Stake Family History Centre Director, as Stake Clerk. And, oh yes, Sheila and I were sealed in the London Temple in September 1979.

‘I believe none of this would have happened if you had not taken the time and the care to send me that book. John, we will be, literally, eternally grateful to you for that. . . . We have often thought about you, John, But did not know how to contact you. It took me so long to accept the gospel that we felt sure you would have moved from the address on your missionary card. We were delighted to see your name on the Scotland Edinburgh Mission web site. Do let us know how you are doing.

“Behold, a sower went forth to sow . . . But other fell into good ground, and brought forth fruit, some an hundredfold, some sixtyfold, some thirtyfold” (Matthew 13:3-8). As missionaries and as members, you may never know what will result from the seeds that you sow. A small act of kindness, a testimony expressed in lifestyle, the gift of a book. Have faith, for if the soil be good, it will eventually bring forth fruit.