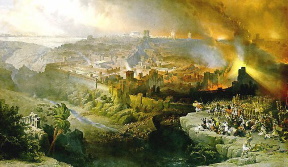 The prophet Nephi began his record with the explanation that in the days of Zedekiah, prophets came to warn the people that “they must repent, or the great city Jerusalem must be destroyed” (1 Nephi 1:4). Lehi, being concerned for his family, went to the Lord in prayer for confirmation of the teachings of the prophets. The result of his earnest prayer was that he received a vision, that in time and after persecution and additional visions, led him to leave Jerusalem for a new land. Nephi, desiring to know for himself, went to the Lord and received the promise that “inasmuch as ye shall keep my commandments, ye shall prosper, and be led to a land of promise” (1 Nephi 2:20).

This promise to Nephi, and the warning given to Lehi about Jerusalem, is a reiteration of the promise “Blessed is the nation whose God is the Lord” (Psalm 33:12). One of the great lessons of the scriptures taught from generation to generation is that “Righteousness exalteth a nation: but sin is a reproach to any people” (Proverbs 14:34).

Abinadi was called to join with the prophets of all ages to warn his people of their impending destruction because of their wickedness. “Abinadi, go and prophesy unto this my people, for they have hardened their hearts against my words; they have repented not of their evil doings; therefore, I will visit them in my anger” (Mosiah 12:1). With their refusal to listen to the warnings of Abinadi, the people of King Noah did indeed reap the anger of the Lord and were either killed in battle or brought into bondage by the Lamanites.

Today the world is moving towards destruction. As we look around us, we can see fulfillment of the prophecy that preceding the second coming of our Savior it will be “as the days of Noah” (Matthew 24:37). In the days of Noah, “the earth also was corrupt before God, and the earth was filled with violence . . . And God said unto Noah, The end of all flesh is come before me; for the earth is filled with violence through them; and, behold, I will destroy them with the earth” (Genesis 6:11-13).

The Lord has declared from the beginning that the nations of the earth are blessed through righteousness, and they are destroyed through wickedness. The words of the prophets in our day confirm that the words of scripture are just as true today as they have been throughout time.

President Ezra Taft Benson stated, “The Prophet Joseph Smith is reported to have prophesied the role the priesthood might play to save our inspired Constitution. Now is the time to move forward courageously—to become alerted, informed, and active” (An Enemy Hath Done This, p. 321). And again in General Conference, “The Prophet Joseph Smith said: ‘It is our duty to concentrate all our influence to make popular that which is sound and good, and unpopular that which is unsound. Tis right, politically, for a man who has influence to use it. . . . From henceforth I will maintain all the influence I can get’ (History of the Church, 5:286). I have faith that the Constitution will be saved, as prophesied by Joseph Smith. It will be saved by the righteous citizens of this nation who love and cherish freedom. It will be saved by the enlightened members of this Church–among others–men and women who understand and abide the principles of the Constitution” (Ensign, November 1987, p. 6-7).

President Gordon B. Hinckley once declared, “Without acknowledgment of Deity, without recognition of the Almighty as the ruling power of the universe, the all-important element of personal and national accountability shrinks and dies. Are we so arrogant as to believe that we can get along without Him? We see the manifestation of that arrogance in the great host of social problems with which we deal these days. Teen pregnancy, abandoned families, failure to recognize the property and rights of others, gangs of young people cruising the streets of our cities, and many other problems like these have resulted, in substantial part at least, from failure to recognize there is a God to whom someday each of us must give an accounting. . . . There can be no doubt of the sickness in our society today. We cannot build prisons fast enough to accommodate the need. Humanism has replaced worship in the lives of so very many. We are forsaking the Almighty, and I fear He is forsaking us” (29 June 1997, The Spirit of America, p. 156).

It does not matter what nation of the world you call home, “Righteousness exalteth a nation” (Proverbs 14:34). The words of the Lord to Nephi apply to all people, “inasmuch as ye shall keep my commandments, ye shall prosper” (1 Nephi 2:20). Let us follow the counsel of our prophets and not be like the people of King Noah who refused to listen to Abinadi’s warnings. May we reexamine our lives and desire to live a more righteous life. May we teach our families the ways of the Lord, and be “an example of the believers, in word, in conversation, in charity, in spirit, in faith, in purity” (1 Timothy 4:12). May we not forsake the Almighty. “Blessed is the nation whose God is the Lord” (Psalm 33:12).