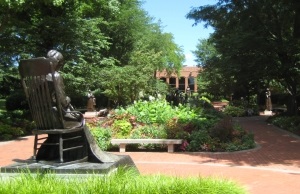 In the summer of 1978, the Relief Society of the Church dedicated a two acre garden park in Nauvoo, Illinois, in honor of the women of the Church. It was a wonderful week filled with beauty, pageant, spirituality, and rain. And now, more than 40 years later, the trees and bushes have matured and the gardens have become more beautiful than ever before. It is a truly beautiful place that is fitting the women of the Church.

At the North end of the gardens is a statue of Joseph Smith giving his wife Emma a donation for the work of the Relief Society. Emma was the society’s first president and was truly an “elect lady.” However, she has not always received the respect in the Church as she deserved. The disappointment of her not coming west with the body of the Church in the 1840\’s had left some hard feelings towards her historically. The events of that summer of 1978 would move mountains of emotion and restore Emma to a position of respect and love in the Church.

The winter season previous to the dedication found a gentle older man traveling the Nauvoo area giving a lecture of the life of Emma Smith. Erwin E. Wirkus was President of the Iowa Des Moines Mission, of which Nauvoo was a geographical part. He entitled his lecture, “Judge Me Dear Reader,” which also became the title of a small book he authored. The book told Emma’s story in her own words as Erwin Wirkus felt she would have expressed them. It was touching and stressed the great sacrifices she had made for her husband. It showed her strength in the face of persecution, and her devastation at the death of her husband. The book brought her to life and helped the reader see her as the women she was.

I was seventeen that year, and the youth of the Nauvoo Branch wanted to help raise money for the building fund for the addition to the Nauvoo Chapel. I contacted President Wirkus and asked him if we could sell his book at the pageant, Because of Elizabeth, that was going to be performed during the dedication of the Monument to Women. He agreed to allow us to sell them if all the profits went to the building fund. Much to his amazement, we sold thousands of his book during the week of dedication, which later led to his small book becoming a best seller in the LDS market the following year. We raised several thousand dollars for the building fund, and, along with the pageant, many of the emotions in the Church surrounding Emma became feelings of love and respect for her.

Benjamin Johnson recorded that on a Sunday morning he and Joseph Smith were sitting in the dining room when two of his children “‘as just from their mother, all so nice, bright and sweet.’ Joseph said, ‘Benjamin, look at these children. How could I help loving their mother; if necessary, I would go to hell for such a women.’ . . . meaning, ‘I feel strongly and deeply toward my wife’” (Joseph Smith the Prophet, p. 64-65). Brother Johnson added, “Emma, the wife of his youth, to me, appeared the queen of his heart and of his home” (Joseph, p. 158). Jesse N. Smith said of Emma, “I knew that queenly women, his wife, Emma Smith. I may say that I was greatly impressed with her personality. She was the fitting helpmate of such a man. I stood in awe of this lady far more that I did of the Prophet himself, because she was so considerate of the feelings of the children” (Joseph, p. 158-159).

Joseph and Emma had nine children, four of whom died at birth and one at fourteen months. They also adopted twins, one of whom, little Joseph, died at eleven months as a result of the exposure he suffered the night Joseph was beaten, tarred and feathered in Hiram, Ohio. Emma only delivered one child in a home of her own, and that was David Hyrum who was born after Joseph’s death. Truman Madsen wrote, “And as for Emma in general, the certainty of the record is this simple: Joseph Smith loved her with his whole soul. And the corollary is, Emma loved him with her whole soul. She was not only a remarkable woman, but except for the difficulties that came with plural marriage, she was also a noble and glorious supporter of all the Prophet did” (Joseph, p. 30).

Lucy Mack Smith, Joseph’s mother, wrote, “I have never seen a woman in my life, who would endure every species of fatigue and hardship, from month to month, and from year to year, with that unflinching courage, zeal, and patience, which she has ever done . . . she has breasted the storms of persecution, and buffeted the rage of men and devils, which would have borne down almost any other woman” (History of Joseph Smith, p. 191).

Emma died on April 30, 1879, thirty five years after Joseph, with the words, “Yes, I’m coming Joseph. Joseph” on her lips. As Erwin Wirkus wrote, “Oh, be careful as you judge Emma, dear reader. Be compassionate!” (Judge Me Dear Reader, p. 74). “Her children arise up, and call her blessed: her husband also, and he praiseth her” (Proverbs 31:28).

I was once walking the streets of Nauvoo, visiting Joseph and Emma’s homes, their grave site, and the garden Monument to Women. I was reminded of the greatness of not only Emma, but of many of the women in my life. On this mothers day weekend, may we all express gratitude to the “elect ladies” in our homes and hearts. May we love them as Joseph loved Emma. May we “arise up, and call [them] blessed” and may we honor them for eternity.