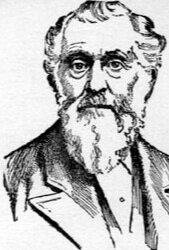 When the Saints left Nauvoo in 1846, new settlers moved from Germany and France arrived to take their place. The group from France were known as Icarians under the leadership of Etienne Cabet.

Étienne Cabet was a French philosopher and utopian socialist who founded the Icarian movement. Cabet became the most popular socialist advocate of his day, with a special appeal to artisans who were being undercut by factories, and his communitarian ideals (based on the Golden Rule) later influenced Karl Marx and others. Cabet published Voyage en Icarie in French in 1839 (and in English in 1840 as Travels in Icaria), in which he proposed replacing capitalist production with workers\’ cooperatives. Recurrent problems with French officials (a treason conviction in 1834 resulted in five years\’ exile in England), led him to emigrate to the United States in 1848.

In 1839, Cabet returned to France from England to advocate a communitarian social movement, for which he invented the term communisme. Cabet\’s notion of a communal society influenced other socialist writers and philosophers, notably Karl Marx and Friedrich Engels. Some of these other writers ignored Cabet\’s Christian influences, as described in his book Le vrai christianisme suivant Jésus Christ (\”The real Christianity according to Jesus Christ\”, in five volumes, 1846). This book described Christ\’s mission to be to establish social equality, and contrasted primitive Christianity with the ecclesiasticism of Cabet\’s time to the disparagement of the latter. In it, Cabet argued that the kingdom of God announced by Jesus was nothing other than a communist society.

When he arrived in New Orleans Cabet learned about a place up the Mississippi River that had been vacated by a majority of its citizens and could be purchased cheap. He and his group would purchase 12 acres that included the burned out Temple site. Here they built an Icarian community.

In the spring of 1855, Cabet tried to revise the colony\’s constitution to make him president for life, but was instead relieved of the presidency, so his followers went out on strike, and were in turn temporarily barred from the communal dining hall. Although the colony by then had 526 members and 57 more across the Mississippi River at Montrose, Iowa, it was suffering economically—dependent upon money brought by new members and subsidies from the \”Le Populaire\” home office in France.

John Taylor was an English-American Philosopher and apostle of the Church of Jesus Christ of Latter-day Saints. He would serve missions for the Church in his homeland of England and later in France. He would serve as the third President or the Church. He was an Editor for both the Times and Seasons and Nauvoo Neighbor and was wounded in Carthage Jail when Joseph and Hyrum Smith were killed. He was forced from his home in Nauvoo during the exodus of the Saints to Utah. He published papers in France and New York. He also wrote several books including The Government of God and The Mediation and Atonement of Our Lord and Savior Jesus Christ.

On September 13, 1857, John Taylor spoke at the Bowery, in Salt Lake City, about the Utopian Socialism movement and the political theory of The Church of Jesus Christ of Latter-day Saints. Speaking of Ettienne Cabet and his movement in Nauvoo, he said:

“Mr. Cabet commenced lecturing in Franc and had very extensive societies there. About the time we left Nauvoo to come to this land (Utah), Mr. Cabet, with a company of his men (the Icarians) came there. This is a species of communism. The are called ‘communists,’ believing, with Mr. Owen, in a community of goods. They published a newspaper in Nauvoo, and one or more in France. I baptized one of their editors while in Paris on my mission—a man who is now in this valley, by the name of Bertrand.

“Mr. Krolokoski, who was also an editor of the same paper with Mr. Bertrand, came to me to have a conversation about the first principles of the gospel. After a long conversation, he said, ‘Mr. Taylor, do you propose no other plan to ameliorate the condition of mankind than that of baptism for the remission of sins?’

“I replied, ‘This is all I propose about the matter.’

“‘Well,’ he said, ‘I wish you every success; but I am afraid you will not succeed.’

“Said I, ‘Mr. Krolokoski, you sent some time ago, Mr. Cabet to Nauvoo. He was considered your leader—the most talented man you had. He went to Nauvoo when it was deserted—when houses and lands were at a mere nominal value. He went there with his community at the time we left. Rich farms were deserted, and thousands of us had left our houses and furniture in them, and there was everything that was calculated to promote the happiness of human beings there. Never could a person go to a place under happy Circumstances. Mr. Cabet, to try his experiment, had also the selection in France of whom he pleased. He and his company went to Nauvoo, and what is the result? You have seen the published account in the papers. We were banished from civilized society into the valleys of the Rocky Mountains to seek for the protection among savages which Christian civilization denied us—among the peau rouges, or red skins, as they call them. There our people have built houses, enclosed lands, cultivated gardens, built schoolhouses, opened farms, and have organized a government, and are prospering in all the blessings and immunities of civilized life. Not only this, but they have sent thousands and thousands of dollars over to Europe to assist the suffering poor to go to America, where they might find an asylum. You, on the other hand, that went to our empty houses and farms—you, I say, went there under most favorable circumstances. Now, what is the result? I read in all of your reports from there, published in your own paper in Paris, a continued cry for help. The cry is to you for money, money:

“‘We want money to help us to carry out our designs.’ The society that I represent comes with the fear of God—the worship of the great Elohim. They offer the simple plan ordained of God—viz., repentance, baptism for the remission of sins, and the laying on of hands for the gift of the Holy Ghost. Our people have not been seeking the influence of the world, nor the power of government, but they have obtained both; whilst you, with your philosophy independent of God, have been seeking to build up a system of communism and a government which is, according to your own accounts, the way to introduce the millennial reign. Now, which is the best—our religion, or your philosophy?”

“‘Well,’ said he, ‘I cannot say anything.’ “He could not, because these were facts that he was familiar with. “What has become of that society? There are very few of them left. They have had dissensions, bickerings, trouble, and desertions, until they are nearly dwindled to nothing.

“I might enumerate many societies of a similar nature, commenced in different parts of the world and at various times. The results, however, would be proved to be the same; they commenced in the wisdom of man, and ended as speculative bubbles. ‘Truth, based on eternal principles, alone can stand the test.’

“If Owen, Fourier, Cabet, and other philosophers have failed,—if all the varied schemes of communism have failed—if human philosophy is found to be at fault, and all its plans incompetents, and we have not failed, it shows there is something associated with this people and with Mormonism that there is not with them” (Journal of Discourses: Volume 5, p. 237-238).

John Taylor recognized the fallacies of Socialism and warned against it. The true source of “communal” society’s success is living the Gospel of Jesus Christ.