Jacob and an Answer to Prayer 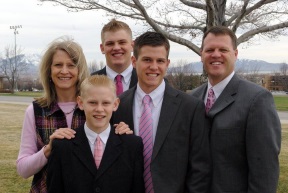 Life hasn’t exactly gone according to plan. At eighteen I sat down and planned my life out and even choose the names of my future six children. My career would provide ample income and the young woman I planned to marry would have been a wonderful partner for a wonderful life. I should have understood life wouldn’t go according to plan when at nineteen, and in New Zealand on a mission, came the dreaded “Dear John” from the woman I had planned to marry.

Few items in my life plan had come to pass and my life has taken a very different path for me than I ever thought it would. Some items because of my own decisions, others have been thrust upon me. Maturation and gaining a greater understanding of myself and personality have also changed the plan. Regardless, life is not what I planned it to be.

In November 2009 I found myself struggling with many emotions and thoughts of my life and where it had taken me. I was approaching the age of my father when he passed away, and I had been thinking back to his life and all that he had accomplished in his barely 49 years of earth life. His family, work experience, and example had weighed heavily on my mind for several months. Along with the thoughts of my father, there were the constant reminders all around me of how the decisions and experiences of my life had brought me to a very different place. I don’t think this is an unusual feeling.

I was feeling very much a complete and utter failure. It seemed everything I touched struggled while other people that I knew seemed to soar to success. Financially my business was doing okay but I was barely making it each month and I struggled with the limitations of my work situation. Being around family was becoming more difficult as I realized my age may prevent me from ever having a family of my own. I went to bed every night alone without the love of a wife and family. No one to tuck in and kiss goodnight, no one to talk to about the day, no one share my life with.

On that late November Sunday, I arrived at Church and sat in my usual place in the far back with all the feelings and thoughts I had been having close to the surface. I was feeling very alone, and in someways, very angry at where I found myself in life. I was fighting back the tears as I sat there by myself running through my mind all the failures of my life, all the comparisons with my father, questioning the very purpose of my life. I felt I was at one of the lowest places of my life and the depression was overwhelming.

During the Sacrament song and prayer, my mind was distracted and my soul was in pain as these type of thoughts ran through my mind: “I don’t have a family” and “I screwed up that.” “I don’t have anything to show for my life” and “I am such a failure.” As the Sacrament prayer ended, the “why me” and “I hate my life” thoughts became a plea to my Father in Heaven as the deacons began to pass the Sacrament.

As a newly ordained deacon, Jacob was passing the sacrament for what I believe was only the second time. He is a fine, nice young man with the rare distinction of being very blond similar to myself at his age. I looked up and saw him coming down the aisle. Frustrated and angry, I thought to myself, “I don’t even have a family or a son, but if I did have a son, he would probably look a lot like him.”

Instantly the most peaceful and calm feeling swept over me. I felt an overwhelming feeling of love and hope. Every feeling of depression and failure was immediately gone. It was as if someone had taken me in their arms and lifted me up. Perhaps my father had been allowed to visit and comfort me. I don’t know , all I do know is that my emotions went through such an abrupt change that there was no doubt in my mind that the Lord recognized my desperation and had answered my prayer and filled me with His Spirit.

I immediately thought, “Oh, I am going to have a son like him someday.” But that thought was quickly tempered by the Spirit. I realized the answer may or may not have anything to do with me personally having a son someday, I really don’t know. But the answer was very much what I needed to understand that Sunday morning. It’s okay and I am loved.

My Father in Heaven knows me, He loves me, and He knows where I am. The Savior knows me, He loves me, and He sacrificed his life for me, and I am saved through His Atonement. They are okay with where I am at in my life. It is all part of the plan personally designed to help me learn and progress. I cannot compare my life with anyone else because our personal purpose and paths are all very different. I am experiencing what I am suppose to experience in this life and everything is going according to the plan. It’s okay and I am loved.

I am very pleased that a young man, who had just turned twelve, was honoring his Priesthood that morning by passing the Sacrament. He was where he was suppose to be, doing what he was suppose to do, and through his calling as a Deacon, he was in a position to be unknowingly used by the Lord to answer my prayer. I am also glad he was worthy to pass the Sacrament, and that he had blond enough hair to catch my attention and be the catalyst for the answer to my plea.

I still struggled some the next few months as I grew closer to being older than my dad when he died, but the day I out lived him passed quietly without fanfare. The Lord has blessed my business, and I am making positive progress in my financial affairs. I don’t know if the Lord will bless me with a family, but I know if it is to happen, the Lord will open that door when it is right. I am more at peace and am enjoying my life more. I now have the ability to again look outward instead of inward, and I am enjoying my interaction with others once again. The problems and difficulties of life haven’t gone away and I still have some bad days, but my ability to handle them and to look forward has greatly increased.

Also, I now better understand why the Lord uses other people to answer our prayers. When ever I see Jacob, especially as he passes the Sacrament, I am reminded of the feelings I had that day in late November. I am reminded of our Heavenly Father’s love for each of us. I am reminded each of our lives has a purpose and a plan and if we are trying to follow the Savior and do His will, He will lead us down the path we each must travel. My faith has been strengthened, my hope confirmed.

A lot has happened in the years since I first wrote this article several years ago. For me, I moved back to Nauvoo, Illinois, where I grew up and where I planned to live the rest of my life in one of my most favorite sacred places in the world. For Jacob, he continued to grow into a fine young man. I would see him and his family whenever I visited Utah and caught up with him. I encouraged him to work towards his Eagle Scout Award and to continue living as a fine Aaronic Priesthood young man. Then I would return to my beloved Nauvoo. But again, life doesn’t seem to go as planned and the Lord continues to teach and mold us into what we need to become.

Earlier this year I had some serious health issues and was “asked” to move back to Utah where family would be able to help me. Congestive Heart Failure, a Heart Attack, and a Stroke, have taken their toll on my life. My mind and body struggles in ways I never thought would happen. However, my health has forced me again to look at my life and the result—-is this web site. While the Daily Devotional Newsletter has been emailed since 2001, my dream was always to build a web site where I could post what I have written over the last twenty years and provide a place that would allow me to share the Gospel on the Internet. LatterDayLight.com is that dream fulfilled.

Jacob continued his life as a growing young man–he’s over six feet tall now and, while the youngest, he is now the tallest in his family. He earned his Eagle Scout award.

One day, shortly after I arrived back in Utah, he came to my house. I opened the door and was surprised to see him. He then commenced to tell me about his Eagle Award and how they gave him a pin for each his parents, and a mentor pin for someone who had encouraged him on his journey to his Eagle. He then held out his hand and placed the pin in my hand. I was so surprised. He then explained how I had been an encouragement to him in working towards his Eagle, even though I was in Nauvoo. My eyes filled with tears and I was so grateful that I was able to help him.

He attends a (YSA) singles ward here in this area, so I don’t see him at Church on Sundays. I have missed a lot of Church with my health issues, but I am getting stronger and have again found fellowship with old friends who I love and care about. I have felt their love. I still wonder about my life and the wife and kids I have never had. The Lord knows what He is doing and I am sure there is a reason that I will learn someday. While my life is still not what I want it to be, or hoped it would be, I still know Heavenly Father loves me. I know my life has purpose and a plan. I feel part of that plan is LatterDayLight.com. I know if we are trying to follow the Savior and do His will, He will lead us down the path we each must travel. I look forward to His return.