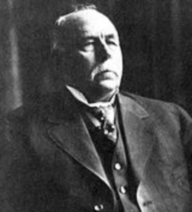 Jesse Knight lived during the early days of the Church in Utah.  During his early years he wasn\’t as active in the Church as he should have been, but once he became active, he played a pivotal role in the finances of the Church.

As a struggling farmer near Payson, Utah, he was one day watching his animals on a hill side when he heard a voice say, \”This country is here for the Mormons.\” He always remembered the voice and interpreted it to mean that the wealth of the land was meant to assist the Latter-day Saints.  He took up mining, hoping, as all miners do, to strike it rich.  However, his attitude was a little different.  He once told his son that the Lord would bless him with all the money he wanted as soon as the Lord knew he could handle it.  That day did come.

Jesse Knight did find his wealth in the hills of central Utah.  He built a town called Knightsville, the only mining town that didn\’t have a saloon and the only mine that didn\’t work Sundays.  He treated his miners well and they in turn, worked hard for him.  As his business and mining ventures grew, he became one of the wealthiest citizens during the roaring mining days of early Utah.

Perhaps the most unique thing about Jesse Knight is the way he used his money.  During a period of high unemployment in the area, he kept a useless mine shaft near Provo in operation just so the miners could take home a paycheck.

A story told by President Heber J. Grant shows another side of Jesse Knight.  Apparently a bank in Salt Lake City that several of the Brethren were directors of was about to fail.  Fearing embarrassment for them and the Church, Elder Grant was asked to call upon two of Utah\’s wealthy men-Reed Smoot and Jesse Knight.

They both didn\’t feel saving the embarrassment of a few men was worth contributing to.  Reed Smoot was asked to donate $2,000 but only offered $1,000.  Jesse Knight was asked to donate $5,000 and refused to donate anything.  Elder Grant asked them to pray about it, and both agreed.  Jesse was normally a \”very generous contributor\” but didn\’t feel this was a worthy cause.  \”He said, \’I\’ll tell you what I will do.  I will go home tonight, and pray to the Lord about that.  And if I get the inspiration to give you that $5,000, I\’ll do it.\’  \’Well,\’ Brother Grant said, \’I might as well have the check in my pocket now.  I am sure if you pray about it, I\’ll get it.\’

Jesse continued to give to the Church whenever asked by the Brethren to do so.  One of his favorite beneficiaries was Brigham Young University.  In essence, BYU would not exist today without Jesse Knight\’s generous donations during the early the years of its existence.  Beginning in 1898, when he made a $1,000 donation for the construction of College Hall, and continuing until his death in 1921, the benefactor gave the school cash, bonds, trust funds, and more than 500 acres where the current campus was built.  A trust fund set up by Jesse and his wife Amanda has produced earnings for BYU for nearly 100 years.

Knight was known by the moniker \”Uncle Jesse\” during his lifetime due to his image as rich but giving uncle. In his writing, he expressed a belief that his money was for the purpose of doing good and building up his church; he regarded the matter as a \”trusted stewardship.\” He is quoted as having said, \”The earth is the Lord\’s bank, and no man has a right to take money out of that bank and use it extravagantly upon himself.\”

In the Book of Mormon, Jacob warned his people about the pride that often accompanies wealth and riches.  He pled with them to rid themselves of the pride that rationalized the way they treated people of less standing.  Instead of viewing each other as children of Father in Heaven and equal in His sight, they positioned themselves in groups based on wealth and education.

Instead of pride, Jacob asked his people to \”think of your brethren like unto yourselves, and be familiar with all and free with your substance, that they may be rich like unto you.  But before ye seek for riches, seek ye for the kingdom of God.  And after ye have obtained a hope in Christ ye shall obtain riches, if ye seek them; and ye will seek them for the intent to do good-to clothe the naked, and to feed the hungry, and to liberate the captive, and administer relief to the sick and the afflicted\” (Jacob 2:17-19).

To obtain a hope in Christ, you must learn of him.  You must learn who you and those around you really are.  We must come to see each other as Heavenly Father sees each of us.  With the knowledge and understanding that we are all beggars before the God and Father of us all, we cannot look upon the needs of others and not feel a need to help where possible.

The Church spends millions of dollars every year to help those in need.  President Hinckley once spoke to the National Press Club and outlined some of the Church\’s efforts to \”clothe the naked, and to feed the hungry.\”  He shared how the Church is working to liberate the captive by providing micro-lending to cottage industries to provide work and opportunity for those who obtain the loan.  Through the Perpetual Education Fund the Church is providing means for many to attend school and raise their level of education in order that they may better care for their families future.  There are Bishop Storehouses and Deseret Industries that reach out to those in need of food and clothing. Humanitarian efforts bring needed supplies to areas devastated by natural disasters around the world.  Truly the Church, and private organizations funded by members, are truly lifting many to a better life.

And truly there is no greater relief to the soul of the \”sick and the afflicted\” than the gospel of Jesus Christ.  Thousands pay their own expenses as they serve missions around the world to share the \”good news\” of the gospel.  And the Church has and is building temples for Church members around the world to teach and administer the blessings of eternity to all who are fallen, sick and afflicted.  There is true peace to the soul in the temples of the Lord.

President David O. McKay taught, \”The noblest aim in life is to strive to live to make other lives better and happier. Browning sounds the keynote in Paracelsus, when he says: \’There is an answer to the passionate longings of the heart for fulness, and I knew it. And the answer is this: Live in all things outside yourself by love and you will have joy. That is the life of God; it ought to be our life. In him it is accomplished and perfect; but in all created things, it is a lesson learned slowly against difficulty.\’ Such is the divine message given to the Prophet Joseph in the words: \’Remember the worth of souls is great in the sight of God.\’ (Doctrine and Covenants 18:10)\” (Gospel Ideals, p. 134).