Martin Harris and the Lost Manuscript 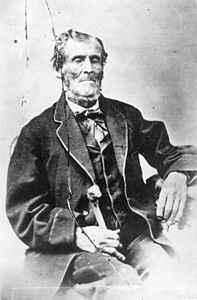 Beginning in April 1828, Martin Harris was scribe to Joseph Smith in the translation of The Book of Mormon.  By June 14th, Joseph had dictated 116 pages of translation to Martin, who began to ask Joseph if he could take the manuscript home with him and show it to his wife.  Knowing that Martin’s wife was very much against what he was doing, Joseph inquired of the Lord through the Urim and Thummim to see if Martin’s request could be granted.  The reply from the Lord was “no.”  Martin was determined and wouldn’t take no for an answer.  He asked Joseph to ask again.  But again the answer came back, “no.”  Fearing what his abusive wife would say if he returned with out evidence of his work, and fearing the taunts from his relatives and friends, Martin pleaded with Joseph to ask again.  This time the answer was “yes.”  He could take the manuscript on the condition that he show it only to his wife, his brother Preserved Harris, his parents, and his wife’s sister.  He had to covenant with the Prophet to show it only to the five mentioned and no one else.  Martin readily agreed to the arrangement and he was soon on his way to see his family with the manuscript in hand.

Back in Harmony, Joseph’s wife, Emma, delivered their first child, who died at birth.  Grief stricken, Joseph spent three weeks at her bedside fearing that Emma would die, too.  As his wife’s condition improved, Joseph’s attention turned to his missing scribe and manuscript.  He left Harmony to travel to Palmyra to find Martin.  After arriving in Palmyra, he sent for Martin to bring him the manuscript.  Martin lived only three miles from the Smith’s farm and was expected to arrive in time for breakfast.  The family looked for him until “half past twelve [when] we saw him walking with a slow and measured tread toward the house, his eyes fixed thoughtfully upon the ground.  When he came to the gate, he did not open it but got upon the fence and sat some time with his hat drawn over his eyes.  At last he entered the house.  After we sat down and were ready to commence eating, Martin took up his knife and fork as if to use them but dropped them from his hands.  Hyrum said, ‘Martin, why do you not eat?  Are you sick?’  Martin pressed his hands upon his temples and cried out in a tone of anguish, ‘Oh! I have lost my soul.  I have lost my soul.’

“Joseph, who had smothered his fears till now, sprang from the table, exclaiming, ‘Oh! Martin, have you lost that manuscript?  Have you broken your oath and brought down condemnation upon my head as well as your own?’

“‘Yes,’ replied Martin, ‘it is gone and I know not where.’ ‘Oh, my God, my God,’ said Joseph, clinching his hands together.  ‘All is lost, is lost! What shall I do?  I have sinned” (History of Joseph Smith by His Mother, p. 164-165).  Joseph quickly returned to Harmony to be with his wife and to face the Lord.  He received the Lord’s rebuke by revelation through the Urim and Thummim, known today as Section 3 of the Doctrine and Covenants.

“For although a man may have many revelations, and have power to do many mighty works, yet if he boasts in his own strength, and sets at naught the counsels of God, and follows after the dictates of his own will and carnal desires, he must fall and incur the vengeance of a just God upon him” (Doctrine and Covenants 3:4).  “And behold, how oft you have transgressed the commandments and the laws of God, and have gone on in the persuasions of men.  For, behold, you should not have feared man more than God” (Doctrine and Covenants 3:6-7).

Joseph lost the right to translate for a time.  Martin Harris is labeled a “wicked man” and is chastised for setting “at naught the counsels of God” and for depending “upon his own judgment and boast[ing] in his own wisdom” (Doctrine and Covenants 3:12-13).  But all was not lost.  “But remember, God is merciful; therefore, repent of that which thou hast done which is contrary to the commandment which I gave you, and thou art still chosen, and art again called to the work” (Doctrine and Covenants 3:10).

Joseph regained the blessing of translating the plates and the Lord sent him a scribe in Oliver Cowdery to help him complete the work.  Martin Harris was chosen to be one of the Three Witnesses of the Book of Mormon.  He died in Utah with his testimony of the Book of Mormon on his lips.

Often we find ourselves following “after the dictates of [our own] will and carnal desires,” fearing “men more than God,” and setting “at naught the counsels of God.”  Whenever we replace the will of the Lord with our own, we commit sin and find ourselves losing the influence of the Spirit.  We learn from the Prophet Joseph the importance of listening to the Spirit in directing our lives.  Instead of seeking permission to do our own will, we need to humble ourselves and follow the counsel from the Lord.  He knows all things, including each of us, from the beginning, and knows what is best for us. Perhaps the most important lesson of all—-“remember, God is merciful; therefore, repent of that which thou hast done . . . and [thou] art again called to the work.”

How grateful we should be to our loving Heavenly Father that never gives up on us and continually desires that we return to Him and allow Him to direct our lives in the accomplishment of our purpose and mission here on earth. Remember, the Lord knew of Martin’s act of losing the manuscript 1400 years before it happened (Words of Mormon1:7) and provided a way for Joseph to complete his work of translation.  He will do the same for us.  Did not His plan contain the atonement before the earth was created?  While some opportunities and blessings are lost as a result of natural consequences, we each need to realize that our sins, if repented of, will not keep us from fulfilling our mission on earth and reaching our full potential of becoming like our Father in Heaven.    Our disobedient acts only condemn us if we decide it is useless and  we quit trying. Each of us has a purpose for being here and it is important to allow the Lord to teach and lead us in its fulfillment.

May we each be up to the task!