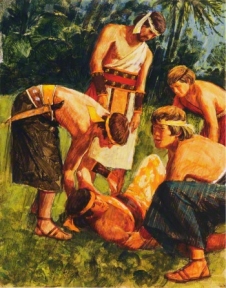 In the Lectures on Faith, Joseph Smith taught, “Let us here observe, that three things are necessary in order that any rational and intelligent being may exercise faith in God unto life and salvation.  First, the idea that he actually exists.  Second, a correct idea of his character, perfections, and attributes.  Thirdly, an actual knowledge that the course of life which he is pursuing is according to his will.  For without an acquaintance with these three important facts, the faith of every rational being must be imperfect and unproductive; but with this understanding it can become perfect and fruitful, abounding in righteousness, unto the praise and glory of God the Father, and the Lord Jesus Christ” (Lectures on Faith, Lecture third, p. 33).

The conversion story of Alma the younger and the four sons of Mosiah are evidence of this statement.  About the time Alma the younger was with his father at the Waters of Mormon, the four sons of Mosiah were at the temple with their grandfather as he delivered one of the greatest discourses recorded in scripture.  Alma the younger was perhaps influenced more by his memories of his father’s life before Abinadi, than the memories of the new man Alma had become.  We can assume from the language of the Book of Mosiah that Ammon, Aaron, Omner and Himni were part of “the rising generation that could not understand the words of king Benjamin, being little children at the time he spake unto his people; and they did not believe the tradition of their fathers” (Mosiah 26:1).

These four brothers, sons of the king who was a descendent of Nephi (Mosiah 25:13-14), joined with Alma the younger, son of the prophet of God, in rebellion and sin.  Alma, along with the sons of Mosiah, was described as a “very wicked and an idolatrous man. . . he led many of the people to do after the manner of his iniquities” (Mosiah 27:8).  “For they were the very vilest of sinners” (Mosiah 28:4).

These five young men were raised in righteous homes by great leaders and men of God.  Mosiah and Alma both received revelation in the teaching and leading of the people of Zarahemla.  Yet, by allowing themselves to be deceived by the voice of the evil one and succumbing to the weakness of the natural man, they were in rebellion to that taught by loving parents.  Mosiah and Alma, with their wives, must have been torn with the love of parents for their children.  We read that Alma prayed “with much faith concerning [his son] that [he might] be brought to the knowledge of the truth” (Mosiah 27:14).

Alma, as a father and with a faith in his Savior that grew from personal experience, pled with his Father in Heaven to touch his son with the Spirit.  Alma, who taught us the covenant of baptism included being “willing to bear one another’s burdens” (Mosiah 18:8), was joined by other members of the Church in praying for young Alma.

The result of this exercise in faith was the miracle of the atonement of Jesus Christ and the birth of faith in five young men.  We read that as they were going about destroying the Church, “the  angel of the Lord appeared unto them,” and they “fell to the earth” in astonishment.

Alma the younger was the main target of the angel’s wrath.  He was reminded of the experience in the lands of Helam and Nephi, reminded that God, in fact, did exist, and warned he was about to be “cast off” (Mosiah 27:11-16).  The sons of Mosiah recovered from their experience, but Alma remained in a state of shock.  These four young men carried their friend to his father, who rejoiced with those who had prayed with him for his son.  They immediately called a fast and began to pray for young Alma.  Perhaps the sons of Mosiah returned home and began a time of prayer and fasting of their own in seeking forgiveness for their offenses towards God and his people.

Two days later, on the third day, Alma awoke and stood before the people.  Gone was the rebellion and the anger, and in its place was peace and joy.  “For, said he, I have repented of my sins, and have been redeemed of the Lord; behold I am born of the Spirit” (Mosiah 27:24).  This young man had been “racked with eternal torment . . . “I did remember all my sins and iniquities, for which I was tormented with the pains of hell” (Alma 36:12-13).  He desired death and extinction, but just at the moment of total despair, “I remembered also to have heard my father prophesy unto the people concerning the coming of one Jesus Christ, a Son of God, to atone for the sins of the world.  Now as my mind caught hold upon this thought, I cried within my heart: O Jesus, thou Son of God, have mercy on me . . . And now, behold, when I thought this, I could remember my pains no more; yea, I was harrowed up by the memory of my sins no more.  And oh, what joy, and what marvelous light I did behold; yea, my soul was filled with joy as exceeding as was my pain!” (Alma 36:17-20).  “And the Lord said unto me: Marvel not that all mankind, yea, men and women, all nations, kindreds, tongues and people, must be born again; yea, born of God, changed from their carnal and fallen state, to a state of righteousness, being redeemed of God, becoming his sons and daughters; And thus they become new creatures; and unless they do this, they can in nowise inherit the kingdom of God” (Mosiah 27:25-26).  His forgiveness was immediate, his life changed in a moments time.

Having obtained a forgiveness for their “vile” sins, the Spirit of charity propelled them to a new life.  Immediately these five young men “traveled throughout all the land of Zarahemla . . . zealously striving to repair all the injuries which they had done to the church . . . and thus they were instruments in the hands of God in bringing many to a knowledge of the truth, yea, to the knowledge of their Redeemer” (Mosiah 27:35-36).

They had great faith and were able to change the lives of many people, including, for the sons of Mosiah, many of the Lamanites.  The knew the Lord actually existed, they had a correct idea of His character, and they now knew that the course of their life was according to His will.  Thus, having this “fruitful” faith, they were “enabled to exercise faith in him unto life and salvation” (Lectures on Faith, Lecture Sixth, p. 57).

While the four sons of Mosiah went to teach the Lamanites, Alma the younger became the Chief Judge in the land of Zarahemla, keeper of the records, and prophet of the Church.  By forgiving Alma of his past and trusting in the new man he had become, the people of Nephi showed their faith in Jesus Christ’s power to change mankind.  Faith expels fear and infuses hope and charity.

May we all strive to strengthen our faith by following the three steps to faith in the Lord Jesus Christ, as did Alma and his four friends, and may we exercise that faith as did the people of Zarahemla.