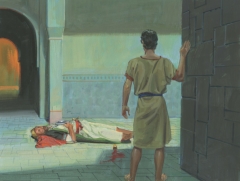 The sons of Lehi were like many young people today.  Each had their struggles and doubts.  Each handled the situations of life in a different manner—with a different attitude.  Nephi records that Laman and Lemuel “did murmur against their father. And they did murmur because they knew not the dealings of that God who had created them” (1 Nephi 2:12).  Even though they had felt the Spirit of the Lord, they refused to believe the world, they knew as Jerusalem, could be destroyed. The Spirit could not influence them because their hearts were set upon the world as evidenced by their rebellious attitude.  Many young people today have focused on the status quo world, refusing to allow the Spirit to touch and change their lives.  They look around instead of up. They look with worldly blinders, unwilling to accept the evidence of a loving Father in Heaven in their lives.

Nephi, on the other hand, like so many youth in the Church today, listened to his father and developed a “great desire to know” if what his father said was true.  He “did cry unto the Lord” and the Lord “did soften my heart that I did believe all the words which had been spoken by my father; wherefore, I did not rebel against him like unto my brothers” (1 Nephi 2:16).  Sam, inwardly desiring to know for himself, listened to the rebelliousness of his older brothers, but also, in humility and faith, listened to Nephi.  Because of the faith of Nephi and his desire to know, he became converted to the Lord.

Because of the faith of Nephi and the influence of the humble mind of Sam, he too would eventually stand next to his brother in righteousness.  Sam was like many of us in that it took time, patience, and faith to gain the testimony of the Lord.  Unlike Laman and Lemuel, Sam did not feel the need to rebel while he waited for his answer.

Learning of the truth for himself, Nephi’s faith was strong and he was obedient to the Lord’s will.  Laman and Lemuel had little faith, little patience, and found satisfaction murmuring against their father for “forcing” them to leave Jerusalem and to be obedient.  When Lehi came to them, as the eldest sons, to return to Jerusalem and obtain the “record of the Jews and also a genealogy of my forefathers” (1 Nephi 3:3) held by Laban, they murmured.  “It is a hard thing” (1 Nephi 3:5), they stated.  We could add they probably said “why do I have to do it?” and “why are you trying to tell me what to do and run my life?”

Lehi, after giving his older sons the opportunity to express and learn faith, turned to Nephi for help.  Trusting his father’s words, Nephi knew the request was of God and there was a purpose in the requirement of obtaining the Plates of Brass.  “I will go and do the things which the Lord hath commanded, for I know that the Lord giveth no commandments unto the children of men, save he shall prepare a way for them that they may accomplish the thing which he commandeth them” (1 Nephi 3:7).

Laman and Lemuel went along to Jerusalem either because Lehi “forced” them to or because they didn’t want to lose any ground to their younger brother. Perhaps to be in the excitement Jerusalem with old friends motivated them.  Once in Jerusalem, Laman met with Laban. Laban threw him out and threatened him.  I am sure Laman, feeling lucky to be alive, said, “See, I told you so.  The Lord didn’t help us get the Brass Plates.”  Nephi then encouraged them to approach Laban again.  This time they used their worldly wealth that they had left behind.  Knowing Jerusalem was going to be destroyed, the gold and silver they left behind had no value to Lehi and Nephi. They knew the heart of Laban was on wealth and not the will of God.

The brothers gathered up their wealth and took it to Laban to try and purchase the records.  However, in their youth, they underestimated the extant of the greed and evil of Laban.  Seeing only young men, Laban threw them out, took their wealth, and sent his guards to kill them.  Scared and angry, Laman and Lemuel “did speak many hard words” at Nephi and Sam.  They began to beat them with a rod, but an angel of the Lord “came and stood before them” (1 Nephi 3:28-29).  He chastised Laman and Lemuel, placed Nephi in a position over them, and sent them back to Jerusalem.

Miracles do not result in instant faith.  Seeing an angel didn’t seem to influence Laman and Lemuel beyond the point of letting Nephi try one more time.  Even after Nephi used the evidence of history when Moses parted the red sea, Laman and Lemuel went no further than the walls of the city.  Nephi on the other hand, was strengthened by the visit from the angel.  He knew the Brass Plates would be delivered into their hands.  “Not knowing beforehand the things which [he] should do,” Nephi entered the city.  Soon he came across a man, fallen to the earth, passed out from drinking too much—it was Laban.  Curious, he drew Laban’s sword to look at the fine workmanship.  Suddenly Nephi was faced with a choice.  The Spirit whispered to him to kill Laban.

Nephi had just used Moses as an example to encourage his brothers to be obedient to the will of the Lord.  Now, the Spirit was asking him to kill someone in direct conflict with the laws of God given to the people through His prophet Moses.  Nephi “shrunk and would that I might not slay him” (1 Nephi 4:10).  The Spirit told him again.  Nephi continued to question.  The Spirit told him again to slay him.  Nephi then remembered the importance of his descendants having the scriptures that they might be taught of the Lord.  He then realized that if he were to be obedient to the word of the Lord, he must slay Laban and obtain the plates.  With a confirmation of the Spirit, “I did obey the voice of the Spirit, and took Laban by the hair of the head, and I smote off his head with his own sword” (1 Nephi 4:18).

The Prophet Joseph taught, “I made this my rule: When the Lord commands, do it” (History of the Church, 2:170).  Sin is simply disobedience to the will of the Lord. Any time we act against the will of God, it is sin.  Whether it is to cut of the head of Laban, or serve our neighbor, if we do not obey the Lord and the whisperings of his Spirit, it is sin.  It is not a specific act necessarily—killing Laban was not a sin, but killing someone usually is—but disobedience to the will of God that must be repented of.  Disobedience is the sin.

Through the atonement of our Savior, Jesus Christ, we can be cleansed and forgiven of our disobedience.  We cannot comprehend all the ways we can sin, “even so many that I cannot number them.  But this much I can tell you, that if ye do not watch yourselves, and your thoughts, and your words, and your deeds, and observe the commandments of God, and continue in the faith of what ye have heard . . . ye must perish” (Mosiah 4:29-30).