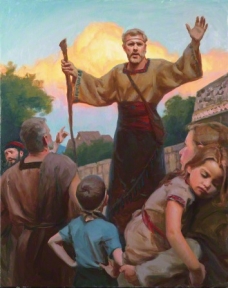 Among the people of Nephi came a man whose name was Sherem.  It had been \”some years\” since Nephi had passed away and Jacob had been called as their leader in righteousness.  Even though there had been great growth among the group of \”wanderers, cast out from Jerusalem . . . and hated of [their] brethren\” (Jacob 7:26), they were still small in numbers and of one family, descendants of Lehi.  Sherem was probably a family member of Jacob.  He may have been a child, \”whose feelings [were] exceedingly tender and chaste and delicate before God\” (Jacob 2:7) at the time of Jacob\’s great discourse to his people recorded in Jacob 2.

But now, a grown man, \”learned\” and with high self-esteem and a \”perfect knowledge of the language of the people\” (Jacob 7:4), his \”natural man,\” had been deceived by the devil who misled him in his understanding of the scriptures, believing that there was no need for Christ.

Sherem\’s hope in Christ was replaced by a distorted dedication to the law of Moses, a confidence in the abilities of man, and a disbelief in the ability to know the future.  He denied the truth, for he said, \”there is no Christ, neither has been, nor ever will be\” (Jacob 7:9).  He placed his hope and trust in man and in the symbols of his religion, not in whom the symbols signified.  His questioning and arrogant spirit desired to confront Jacob, and the opportunity arrived.

While Sherem had the spirit of contention and self-assurance, Jacob faced him calmly, filled with the Holy Spirit.  Jacob\’s faith was unshakable, for he had seen his Redeemer (2 Nephi 11:3).  But instead of testifying from his own experience, Jacob turned to the scriptures that Sherem declared he believed in for evidence of faith in Christ.  (Jacob 7:10)  What greater testimony is there then the scriptures, \”for they truly testify of Christ. . . . none of the prophets have written, nor prophesied, save they have spoken concerning this Christ\” (Jacob 7:11).  What great power there is in the Scriptures to teach and expound truth!

Only after the testimony of the scriptures as evidence for faith, does Jacob present the next evidence, his own testimony of the Savior and his mission, for \”I have heard and seen; and it also has been made manifest unto me by the power of the Holy Ghost\” (Jacob 7:12).  What great power there is in personal testimony confirmed by the Holy Spirit!

Sherem asked for a sign, and the Lord gave him one.  He fell to the earth only to suffer for many days under the influence of a guilty mind.  What great torment must have filled his soul as he realized his mistake, the nothingness of man, and the need for a Savior.   Sherem called the people of his extended family together and declared he knew he had been teaching falsehood, and now, knew the truth.  For there is a Christ, always has been, and ever will be.   He died with a testimony and confession before God on his lips, to the astonishment of those who were there with him. (Jacob 7:21)

Jacob\’s prayers had been answered.  His family, weakened and straying, returned to faith.  They searched the scriptures, learned the evidence of Christ\’s coming, and through the confirmation of the Spirit, knew the testimonies the scriptures contain were true.  \”And it came to pass that peace and the love of God was restored again among the people\” (Jacob 7:23).  In turn, they reached out to their brethren the Lamanites, to restore them to a knowledge of the truth of their Savior, but it was in vain.  The anger and hatred of their lost relatives was counteracted with their trust in God and the rock of their salvation. (Jacob 7:25)

President Ezra Taft Benson taught, \”The Book of Mormon exposes the enemies of Christ. . . . It fortifies the humble followers of Christ against the evil designs, strategies, and doctrines of the devil in our day.  The type of apostates in the Book of Mormon is similar to the type we have today.  God, with his infinite foreknowledge, so molded the Book of Mormon that we might see the error and know how to combat false educational, political, religious, and philosophical concepts of our time\” (A Witness and a Warning, p. 3).

The scriptures in possession of Lehi\’s people were the records of the Brass Plates—the stories of Adam, Enoch, and Moses and the words of Noah, Abraham, and Isaiah.  Thanks to great men such as Jacob, we now have the words of evidence found in the Book of Mormon from the new world, and from the old—the New Testament with its evidence from Matthew, Mark, Luke, John, and the epistles.  With the restoration of the Gospel came the First Vison and the testimony of the boy prophet, Joseph Smith.  Joining him are the men who followed in his prophetic footsteps.  At the turn of the new century, modern prophets and apostles bore testimony of the Savior in The Testimony of the Living Christ.  In these last days, the Church of Jesus Christ of Latter-day Saints stands and boldly testifies that Jesus is the Christ, the Savior and Redeemer of the world, the resurrected Lord.

While we may feel as Jacob that \”our lives passed away like as it were unto us a dream\” and at times feel we are a \”lonesome and a solemn people, wanderers\” on this world far from our heavenly home and we \”mourn out our days\”  (Jacob 7:26), we can also join with Jacob in declaring, \”O how great the goodness of our God, who prepareth a way for our escape from the grasp of . . . that monster death and hell\” (2 Nephi 9:10).  \”But, behold, the righteous, the saints of the Holy One of Israel, they who have believed in the Holy One of Israel, they who have endured the crosses of the world, and despised the shame of it, they shall inherit the kingdom of God, which was prepared for them from the foundation of the world, and their joy shall be full forever\” (2 Nephi 9:18).  \”Therefore, cheer up your hearts . . .  Reconcile yourselves to the will of God . . . and remember . . . it is only in and through the grace of God that ye are saved\” (2 Nephi 10:23-24).

May we obtain the \”peace and the love of God\” that comes with faith as we search the scriptures, pray, and listen to the words of our living prophets.  \”O then, my beloved brethren, repent ye, and enter in at the strait gate, and continue in the way which is narrow, until ye shall obtain eternal life. O be wise; what can I say more?\” (Jacob 6:11-12).