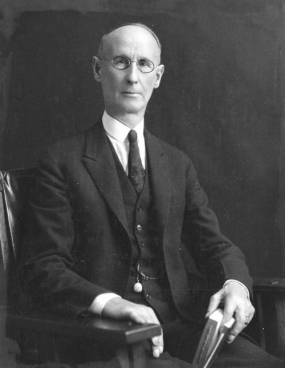 Since I was a young man I have loved to hear stories about Elder J. Golden Kimball.  Elder Kimball was one of the Seven Presidents of the Seventy, but seemed to have never understood how he came to that position.  It is reported he once said, “When the Lord calls an old cowboy-muleskinner like me to be a General Authority, brother, I tell you it has to be revelation” (More J. Golden Kimball Stories, p. 104). On another occasion he reportedly said, “If it isn’t inspiration or revelation, then it’s relation.  If Heber C. Kimball wasn’t my father, I wouldn’t be a damn thing in this Church” (J. Golden Kimball Stories, p. 29).

Either way, Elder J. Golden Kimball served the Lord for many years and endeared himself to the Saints who returned his love.  He was a common man, schooled in the ways of hard work and difficulty, willing to acknowledge his personal struggles within himself, but with a testimony of the Lord’s work here on earth.  This unique combination of earth and spirit gave hope to the Saints who identified with him.

Today, nearly eighty years after a car accident took his life, J. Golden Kimball is a true folk hero in the Church.  J. Golden Kimball stories are told far and wide and we laugh at his humor, spontaneity, and common sense—and uncommon language.   But Elder Kimball was more than a man who often “slipped” in his language or was a bit too “blunt” with his words.  What endeared him to the members of the Church was his testimony and spirituality.  He met them on common ground and lifted them with hope, reaching for the eternities.  His heart was pure and full of love.  The members felt it and were strengthened by it.

For example, the story is told of how a woman by the name of Wendy would often visit her sister who had multiple sclerosis and was confined to a wheelchair.  Her sister lived near Temple Square and Wendy would push her wheelchair through the gardens to Temple Square and together they would enjoy the beautiful surroundings.  One day Wendy’s sister saw Elder Kimball way off in the distance hurrying towards the Temple, apparently late for a meeting.  Her sister wanted to meet Elder Kimball and asked Wendy to try to catch him.  “Okay, but you hang on!” and off they went racing towards Elder Kimball yelling for him.

It appeared they wouldn’t make it until someone stopped Elder Kimball and pointed towards them.  He then turned and “walked” towards them like he had all the time in the world.  “He didn’t look at me—he looked at my sister.  He knelt down, took her hand, and he kissed her on the cheek.  He said, ‘Remember, my dear, there will yet be better times.’  He got up, wished me a good day, and walked to the Temple” (More J. Golden Kimball Stories, p. 104-105).

In Elder Kimball’s Salt Lake City ward, there was a young single women.  Whenever there was a birthday party, Christmas party, or other holidays being celebrated, Elder Kimball would be invited and would attend if he was feeling well and was in town.  This lovely women was in the car that picked up Elder Kimball for a party on one occasion.  At the party he quietly sat in the corner listening to the conversation.  “Somehow the conversation got around to the fact that I was the only single woman in the room.  They were kidding me, but the joshing got a little mean.  What was I going to do on the morning of the first resurrection with no husband.  I just tried to pass it off and said, ‘Oh, I’ll just sleep a little longer. You all go on ahead without me and find your mates.’ . . . I was getting embarrassed.  It was hard on me, but they still were at it when Brother Kimball interrupted and said, ‘Let me tell you about some experiences I had when I was off on a conference assignment last weekend.’  He had sensed my embarrassment and changed the whole direction of the conversation. . . . We took Brother Kimball home in the car that night. . . . We dropped him off at his home and he waved and thanked us all and started down the driveway.

“Then he turned, raised his cane and said, ‘Wait a minute!  Wait a minute!’  He came to my side of the car and tapped on the window.  I rolled the window down.  He looked in at me and said, ‘Irma, I want you to know something.  On that morning of the first resurrection, don’t you be worried—I’ll be there for you.’  Then he turned and walked back to the house.

When J. Golden Kimball was killed in an automobile accident the Church lost a man of faith and love.  While others looked for things as they should be, he saw things and people as they really are, children of a loving Father in Heaven.  He wanted the best for others, wanted to instill hope into people’s lives.  He wasn’t pompous or arrogant, but lived a life that testified “if I can make it, you can to.”  His legacy is not just his humor and language, but his lessons of hope and love.

They say that when J. Golden arrived at the pearly gates that Saint Peter said, “Well!  If it isn’t Brother J. Golden Kimball: We finally go you here.”  And J. Golden replied, “Hell, you had to kill me to do it!” (More J. Golden Kimball Stories, p. 117).

“But the LORD said unto Samuel, Look not on his countenance, or on the height of his stature; because I have refused him: for the LORD seeth not as man seeth; for man looketh on the outward appearance, but the LORD looketh on the heart” (1 Samuel 16:7).  “And the Lord called his people ZION, because they were on one heart and one mind, and dwelt in righteousness” (Moses 7:18).

Zion will yet arise when we see each other through our Heavenly Father’s eyes and care about each other as much as the Savior cares for us.  Humility, love, faith, hope, and testimony—that is the legacy of Elder J. Golden Kimball.