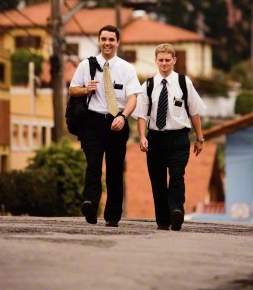 Elder LeGrand Richards, who served as an Apostle from 1952 until his death in 1983, taught, “I think that the Church, with its institutions, is the greatest influence in the world today to make really uncommon people who can touch the lives of others. . . . We live in an uncommon day.  There is more revealed truth upon the earth today than there has been in all the history of the world.  These are the last days when the Lord is to complete his work.

The apostle Paul said that the Lord had revealed unto him the mystery of his will, that in the dispensation of the fulness of times–and we live in that dispensation–-the Lord would bring together in one, in Christ, all that is in heaven above, and that is in the earth beneath. . . . we have the only program in all this world to unite that which is in heaven above and that which is upon the earth.  That is another evidence that this work that we are engaged in is an uncommon work” (LeGrand Richards Speaks, p. 167-168).

Elder Richards continues, “One of the greatest evidences of that is in the great missionary program of the Church.  Our boys go out with little training to prepare them for missionary work, and they meet the learned and the educated of the land.  Yet they are able to show them things that they have never dreamed of.  Yes, this work is not a common work.  It is the most wonderful thing in all this world” (LeGrand Richards Speaks, p. 168).

The sons of Mosiah were uncommon men of the Lord.  “Having taken leave of their father, Mosiah . . . having refused the kingdom which their father was desirous to confer upon them, and also this was the minds of the people; Nevertheless they departed out of the land of Zarahemla . . . to go up to the land of Nephi to preach the word of God unto the Lamanites” (Alma 17:5-8).

As they journeyed and prepared for their mission, “they fasted much and prayed much that the Lord would grant unto them a portion of his Spirit to go with them, and abide with them, that they might be an instrument in the hands of God to bring, if it were possible, their brethren, the Lamanites, to the knowledge of the truth” (Alma 17:9).  During the fourteen years as missionaries living among the Lamanites, they were indeed “made instruments in the hands of God” (Alma 26:3) bringing many, even “thousands of them . . . [were] brought into the fold of God” (Alma 26:4).

With the Lord’s Spirit, they were filled with “knowledge, and also power according to [their] faith and desires which [were] in God” (Alma 18:35).  They were “wise, yet harmless” (Alma 18:22), and filled with love, for they “termed [them] to be [their] brethren” (Alma 17:30; see also Alma 20:26).   “The Lord said unto them also: Go forth among the Lamanites, thy brethren, and establish my word; yet ye shall be patient in long-suffering and afflictions, that ye may show forth good examples unto them in me” (Alma 17:11).

The Prophet Joseph Smith declared, “I want to say to you before the Lord, that you know no more concerning the destiny of this Church and kingdom than a babe upon his mother’s lap.  You don’t comprehend it.  It is only a little handful of priesthood you see here tonight, but this Church will fill North and South America.  It will fill the world” (Conference Report, April 1898, p. 57; quoted in LeGrand Richards Speaks, p. 169).

“How could Joseph Smith, as the lad that he was, have made a statement like that, had he not been a prophet of God? . . . We do live in an uncommon day.  This Church isn’t just another church–this is God’s church, and he has established it. . . . This church that we belong to, with all its institutions and its accomplishments, is God-decreed, and it will stand forever until it shall fill the whole earth. . . . We had a man come to us in Salt Lake a few years back and he was entertained at the Hotel Utah by one of our banker friends.  This man was one of the greatest economists of the world . . . After we were through eating, the governor was asked to say a few words (at the time, he was not a member of the Church).  He stood up and said, ‘The finest men I know in this world are the leaders of the Mormon Church.’  Then the President of the Church said a few words.  Then they asked this great economist if he would like to speak.  He stood up and his jaw began to quiver and the tears began rolling down his cheeks and he said something like this: ‘I have never stood in such presence in my life.   I had to come out here to these valleys of the mountains to find the kind of Christianity I think can save the world.’  We didn’t ask him for that, but he felt it, because the Lord’s work is an uncommon work, and it is making uncommon men and uncommon women” (LeGrand Richards Speaks, p. 169-170).

“I invite you to appreciate what you have and appreciate your membership in this church, to believe with all your heart and your soul that this work will achieve its God-decreed destiny” (LeGrand Richards Speaks, p. 172).