The Day Joseph and Hyrum Smith Were Murdered 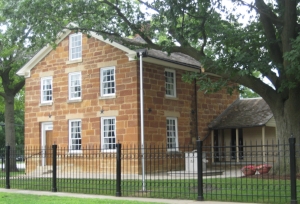 The events of the day Joseph and Hyrum were killed is a day the Latter-day Saints will never forget.

June 27th 1844 – After a restless night in Carthage Jail, Dan Jones went downstairs and inquired of the guard the cause of the gunfire during the night. Frank Worrel (who would later be the first person killed by Orin Porter Rockwell), the officer of the guard, told him that unless he left he would be killed with Joseph and everyone else with him before nightfall. Joseph sent him to tell the Governor.

On the way to the Governor\’s quarters he heard a group of men talking about killing the Prophet when Governor Ford left Carthage for Nauvoo. The governor dismissed Dan Jones\’ report. Dan Jones then stated that the Prophet and his brother are \”American citizens, and have surrendered themselves to your Excellency upon your pledging your honor for their safety; they are also Master Masons, and as such I demand of you protection of their lives\” (History of the Church, 6:603). Governor Ford \”turned pale\” and Dan Jones continued with a request that, \”if you leave their lives in the hands of those men to be sacrificed . . . the Almighty will preserve my life to a proper time and place, that I may testify that you have been timely warned of their danger\” (History of the Church, 6:603).

When he returned to the jail, the guard refused to let him enter. He went to the Governor to receive a pass back into the jail, but was refused. Joseph wrote a letter to Emma and said, \”I am very much resigned to my lot, knowing I am justified, and have done the best that could be done. Give my love to the children and all my friends . . . May God bless you all. Amen\” (History of the Church, 6:605). As the Governor prepared to go to Nauvoo, Cyrus Wheelock approached him and told him that he feared for Joseph\’s life. The Governor again assured him of their safety. He left the Carthage Greys militia in Carthage to protect the jail, however, many of the Grays were part of the mob.

Cyrus Wheelock went to the jail and as it had been a little rainy in the morning, was able to wear his overcoat into the jail and was not searched. He had a six-shooter in the pocket which he gave to Joseph. Messages were given to him and he left for Nauvoo. As part of his instructions to Cyrus Wheelock, Joseph told him about how Jesus had the power as a child to rule the Jews, but could not because he lacked the physical strength. He then compared that to the Church and said, \”We have the revelation of Jesus, and the knowledge within us is sufficient to organize a righteous government upon the earth, and to give universal peace to all mankind, if they would receive it, but we lack the physical strength, as did our Savior when a child, to defend our principles, and we have of necessity to be afflicted, persecuted and smitten, and to bear it patiently until Jacob is of age, then he will take care of himself\” (History of the Church, 6:608-609).

The Governor was again warned just before leaving for Nauvoo by Marshal John P. Greene that there was a \”conspiracy on foot to take the lives of Joseph and Hyrum during his absence,\” but again the Governor brushed it aside. (History of the Church, 6:611).

Several men visited and left Carthage Jail during the afternoon as they continued to pursue legal avenues. Willard Richards became ill and Brother Steven Markham was asked to go get some medicine for him. On his return a company of Carthage Grays grabbed him and put him on his horse and forced him out of town by bayonet. At 3:15 p. m., John Taylor sang \”A Poor Wayfaring Man of Grief\” and the Prophet asked him to sing it again. Hyrum read extracts from Josephus. At 4:00 p. m. there was a change of guard and eight men were left to guard the jail. The main body of the Carthage Greys camped about a quarter mile from the jail at the public square.

At 5:00 p.m., the jailer, Mr. Stigall, returned to the jail and told them Stephen Markham had been driven from Carthage and had fled to Nauvoo. He suggested that the men move to the cell as they would be safer there. Joseph replied that they would after dinner. Joseph asked Willard Richards if he would go into the cell with him. Dr. Richards replied that not only would he do that, but \”\’if you are condemned to be hung for treason, I will be hung in your stead, and you shall go free.\’ Joseph said, \’You cannot.\’ The doctor replied, \’I will.\’\” (History of the Church, 6:616).

A few moments later the attack on the jail began. Hyrum was killed first. John Taylor was shot and he fell under the bed, but survived. Willard Richards was not injured. The Prophet Joseph sprang to the window and was shot. Falling out the window he said, \”O Lord, my God!\” The mob dispersed almost immediately when a call went up that \”the Mormons are coming.\”

A message was sent to Nauvoo written by Willard Richards that stated, \”Joseph and Hyrum are dead. Taylor wounded, not very badly. I am well. Our guard was forced, as we believe, by a hand of Missourians from 100 to 200. The job was done in an instant, and the party fled towards Nauvoo instantly. This is as I believe it. The citizens here are afraid of the Mormons attacking them. I promise them no!\” (History of the Church, 6:621-622).

The message arrived at daybreak the next morning at the Mansion house in Nauvoo. In the mean time, word of the deaths had reached the Governor on his way back to Carthage. He held up the messenger until he could remove all the public records from Carthage in fear of retaliation from Nauvoo.

Samuel Smith, the Prophets brother, was chased by a mob as he was approaching Carthage to visit Joseph. He became ill from the chase.

By midnight, Carthage was abandoned and only a few were left to help Willard Richards treat the wounds of John Taylor and prepare the bodies for their return to Navuoo.