“The Lord Worketh In Many Ways to the Salvation of His People” (Alma 24:27) 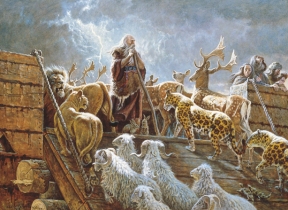 In our mortality, we have a tendency to limit the power and love of our Heavenly Father in our lives and in the lives of those around us.  Often I have wondered how He could love someone like me, or someone who has offended me, or the person who fills their life and the news with evil acts towards their fellowmen.  However, the more I learn of the gospel and our Savior, the more I realize the  inadequate understanding I have of His power and love—both for me and for others.

For example, at the time of Noah, the people were so wicked that he destroyed them from off the face of the earth.  Noah was called to be a prophet, a missionary called to warn the people, call them to repentance, and save whom he could on the ark  The Bible tells us Noah was not successful in saving anyone but himself and his family.  Perhaps not unlike missionaries today, who serve faithful missions in a wicked world, who do not find success in conversions, but who strengthen their own testimonies, thus saving themselves and their future family.  Considering the level of wickedness of the people at the time of Noah, one would not think they could be saved.  And yet we read, “For Christ also hath once suffered for sins, the just for the unjust, that he might bring us to God, being put to death in the flesh, but quickened in the Spirit: By which also he went and preached unto the spirits in prison; Which sometime were disobedient, when once the longsuffering of God waited in the days of Noah, while the ark was preparing, wherein few, that is, eight souls were saved by water” (1 Peter 3:18-20).  The Father provided a way for their salvation, just as He has for ours.

The Prophet Joseph Smith taught, “All are within reach of pardoning mercy, who have not committed the unpardonable sin, which hath no forgiveness . . . There is a way to release the spirits of the dead; that is by the power and authority of the Priesthood—by binding and loosing on earth.  This doctrine appears glorious, inasmuch as it exhibits the greatness of divine compassion and benevolence in the extent of the plan of human salvation.  This glorious truth is well calculated to enlarge the understanding, and to sustain the soul under troubles, difficulties and distresses” (Teachings of the Prophet Joseph Smith, p. 191-192).  What a wonderful knowledge of His power and love the temple ordinances, for the living and dead, provide for us.

Those who were converted to the Lord by Ammon and his brethren, began to feel the love of the Lord in their lives to the extent of making great changes in their lifestyle.  Ammon and his brethren taught the people the three pillars of the plan of salvation: the creation, the fall of man, and the plan of redemption which “was prepared from the foundation of the world, through Christ, for all whosoever would believe on his name.  And since man had fallen he could not merit anything of himself; but the sufferings and death of Christ atone for their sins, through faith and repentance” (Alma 22:13-14).  They taught them “that they were all brethren, and that they ought not to murder, nor to plunder, nor to steal, nor to commit adultery, nor to commit any manner of wickedness” (Alma 23:3).  So strong was the Spirit in their teaching, that those who “were converted unto the Lord, never did fall away” (Alma 23:6).  “And the great God has had mercy on us, and made these things known unto us that we might not perish . . . because he loveth our souls as well as he loveth our children; therefore, in his mercy he doth visit us . . . that the plan of salvation might be made known unto us as well as unto future generations” (Alma 24:14).

They buried their weapons of war in the ground as “a testimony to God, and also to men” that their hearts had been changed by the power and love of God.  As a youth, it was difficult for me to understand what took place next in the story of these righteous people.  When an army of Lamanites came to destroy them, they went out to meet them and “prostrated themselves before them to the earth, and began to call on the name of the Lord; and thus they were in this attitude when the Lamanites began to fall upon them, and began to slay them with the sword” (Alma 24:21).  Time for a miracle!  Surely the Lord would save them from death, I thought.  How could a powerful and loving God allow them to perish?  What of their families left behind?  The fact that more Lamanites were converted to the Lord than had been killed, didn’t satisfy my doubts and wonder.  It wasn’t until the wisdom that comes with age, and an increased understanding of the gospel, that I realized untimely death is not a victor nor to be unduly mourned.  The Lord had a purpose in all things in their lives, as in ours.  “Thus we see that the Lord worketh in many ways to the salvation of his people” (Alma 24:27).

As we look about us in the world today, we should be amazed at how the Lord works for the salvation of his people.  No other religion in the world believes in the salvation of souls, saved in the Celestial Kingdom, as do the Latter-day Saints.  For example, the gospel teaches that “little children are alive in Christ, even from the foundation of the world” (Moroni 8:10-12).  The Celestial Kingdom will be filled with the souls of children who died before the age of eight, no matter when or where they lived, their religion, race, or opportunities.  What a great manifestation of God’s power and love for His children.  Truly, “the Lord worketh in many ways to the salvation of his people” (Alma 24:27).