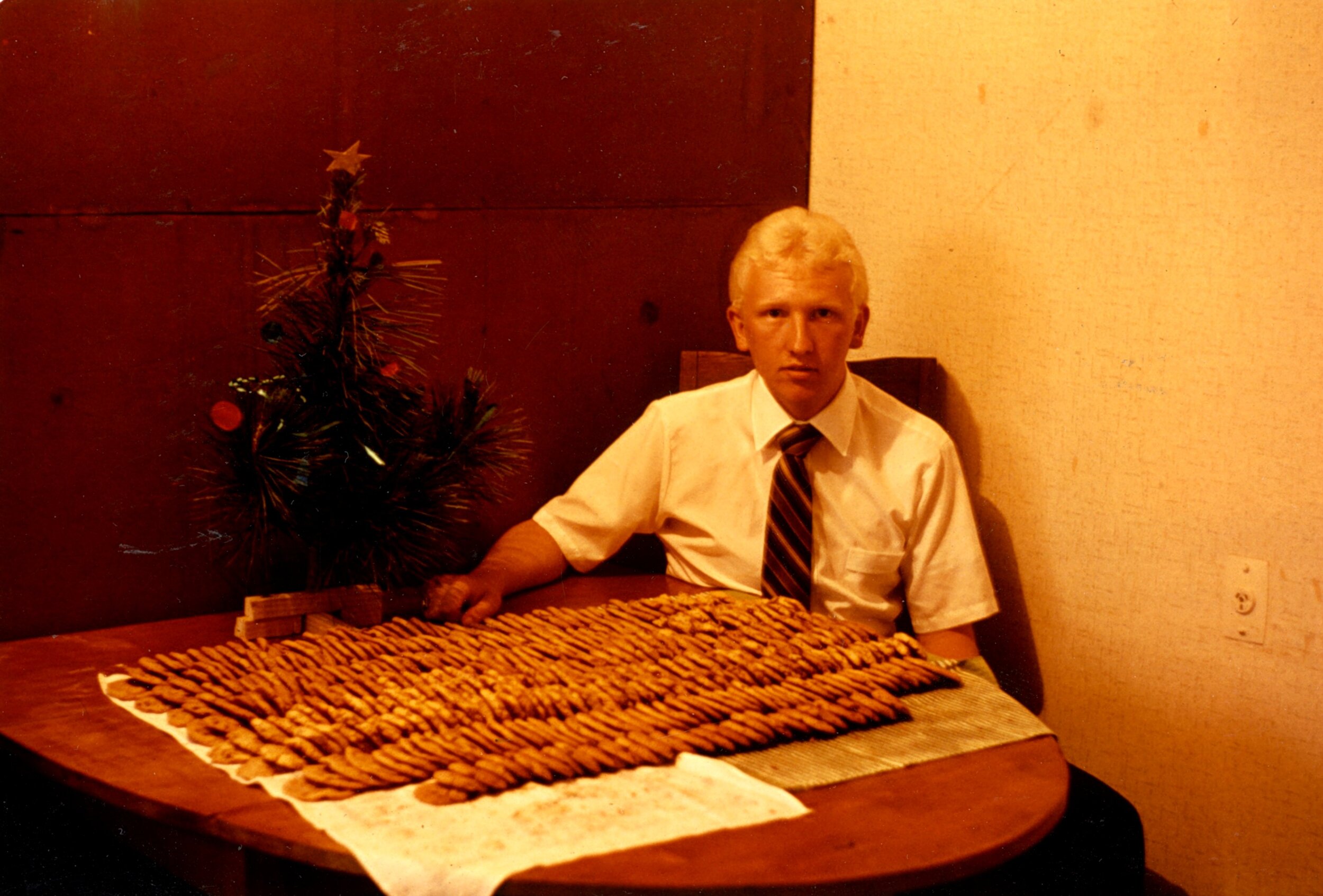 It was not a typical summer day in beautiful Waitara, New Zealand. It was just before Christmas, and it was unusually cold and wet. As missionaries, we were not looking forward to going out into the pouring rain and hoping someone would let two soaking wet young men into their clean, dry home. Elder Bill Johnson and I did our usual morning routine and then wondered what to do with all the rain. We decided to make cookies—or biscuits as they are known in New Zealand. Not just any biscuits, but chocolate chip biscuits.

We ran to the store just around the corner for a few missing ingredients and begin our baking experience. Once we got started, we just kept going. We used the kitchen table to cool the biscuits and to stack them in nice straight rows. The zone leaders showed up about lunch time to see what we were having for lunch. An hour and two dozen biscuits later, they left us to our baking. We started making a list of all the members of our small branch and all the investigators in our area. As the list grew longer, so did the pile of biscuits on the table. By the time we had finished baking, we had a grand total of 30 dozen — 360 cookies — spread across the table. We carefully counted them out so there would be enough for each family and wrapped them in aluminum foil with a nice little tag on each package. We had our Christmas gifts!

That night we began to deliver our small gifts of biscuits around our area. The active members were easy to deliver too, as were the investigators. But we had decided to share with all the members, including one family, the Watson\’s, we had been told to never visit. Apparently several years before they had become less active and there were some strong feelings toward certain members and the Church. They had been embarrassed and been spiritually wounded. We were told that missionaries were not welcomed in their home and had not been in their home for ten years. The one bright spot was the wife, who was more open to some of the members of the branch. We were unsure how to deliver our foil gift of goodies, but we knew there would be a way if we could get them to the wife.

The day after our baking, it was time to make a delivery attempt. We drove past the Watson\’s house and the wife was outside talking to someone who appeared to be getting ready to leave. At the corner, we turned around to drive by again. This time the visitor was just driving away, so we pulled into the driveway just as she was walking towards her house. I jumped out, handed her the cookies, said \”Merry Christmas,\” and jumped back into the car before she knew what had happened. We sighed a big sigh of relief HE wasn\’t there and drove home happy with our day\’s accomplishment.

Over the next few weeks we found a new openness with the members, and I found I was enjoying my mission more than ever. The biscuits seemed to be working miracles. We decided to \”gird up our loins\” and visit the home of the less active Watson family with the stunned wife. The first time we courageously made a visit, we walked up the steps only to see the husband asleep in the living room through the open front door. We quietly backed away and left. A few days later, we got the courage to try again. This time the wife opened the door. \”Oh, come in Elders!\” Now we were the ones stunned. That evening began what became a wonderful friendship with a wonderful family and a major step down the path of what would eventually be reactivation.

The apostle James taught that \”. . . ships, which though they be so great, and are driven of fierce winds, yet are they turned about with a very small helm\” (James 3:4).

Nephi, in describing how the Liahona worked, stated, \”And thus we see that by small means the Lord can bring about great things\” (1 Nephi 16:29).

Alma also testifies that \”by small and simple things are great things brought to pass\” and that \”by very small means that Lord doth confound the wise and bringeth about the salvation of many souls\” (Alma 37:6-7).

It doesn\’t take much to lift the spirits and encourage those around us. Not long ago I was having one of those days where you just feel down and a little discouraged. I was in the East Bay area of Provo and needed to make a stop to use the restroom. I stopped at the Taco Bell and decided to show my appreciation by ordering something from the menu. I walked around the corner to be greeted by a young man, obviously not of our faith or very less active, with a huge smile and a warm greeting of welcome. His friendly, positive service caught me off guard and I soon found myself feeling the burden of discouragement lifting. A simple smile and friendly greeting changed my day and helped me face the stresses of the day in a more positive way.

The Prophet Joseph once said, \”Nothing is so much calculated to lead people to forsake sin as to take them by the hand, and watch over them with tenderness. When persons manifest the least kindness and love to me, O what power it has over my mind, while the opposite course has a tendency to harrow up all the harsh feelings and depress the human mind. It is one evidence that men are unacquainted with the principles of godliness to behold the contraction of affectionate feelings and lack of charity in the world\” (Teachings of the Prophet Joseph Smith, p. 240).

It took only a smile and a few kind words from a fast food employee to lift my spirits, and there were only a half dozen, six small chocolate chip biscuits inside that aluminum foil package delivered to a home in Waitara, New Zealand. However, the Lord uses small and simple things to touch lives — the families and mine. I am grateful for a young man with a great smile and a friendly greeting. I am also grateful that two young missionaries listened to the still \”small\” voice and received the courage through the Spirit to be an instrument in the Lord\’s hands on a \”beautiful\” summer day in New Zealand.