”The Testaments: Of One Fold and One Shepherd.” 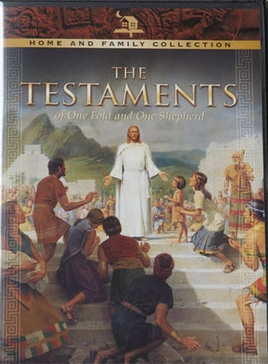 Nearly 20 years ago, the Legacy Theater in the Joseph Smith Memorial Building in Salt Lake City, began to show a new movie produced by the Church—The Testaments: Of One Fold and One Shepherd.  Keith Merrill, the director of the film was asked by President Hinckley to make a film to replace Legacy.  “I was told simply ‘It will be the most important film the church has ever made’. . . The new film was to be about Christ. The mandate was clear. It would proclaim to the millions who come here–member and non-member alike–that Jesus Christ is He whom we worship. That he is the Son of God and the heart and center of our faith. The film was to include a Book of Mormon perspective and the appearance of the  Christ to the people in Ancient America. In case the challenge was not enough, President Hinckley added; ‘I have never seen a depiction of the Savior I liked.’ No men on earth know more of Christ\’s visage than these special witnesses. Their desire to give final approval to the portrayal of Jesus came as a great relief” (http://www.meridianmagazine.com).

At the 1999 Women’s Conference Truman Madsen shared a moment from the filming of The Testaments.  With the completion and opening of the film, we offer this reprint of that newsletter to give you a feeling for this new film on the Savior.

Brother Madsen relates, \”…Recently I have been moved deeply by a time on the crowded set of a movie studio. Here is a young man about age thirty, a convert to the Church, who is cast in the role no human can fully portray. He is Jesus of Nazareth. Earlier in the day he has joined the costumed troupe and the crew praying that they can simulate the defining moment of all eternity when Jesus is nailed to the cross.

\”We watch from a little distance as well as from a monitor that frames the scene. He is dragged to the crossbar. We see them stretch his arm and then raise a huge mallet and place the spike. The camera then shifts to his profile. And when the wrenching and terrible thwack is repeated, his body and face twist convulsively.

\”‘Cut!\’ says the director. They adjust the lights, rearrange the angles, spray the tell-tale red marks on his back and forehead. The takes are repeated. But after the fifth take, he does not sit up. He remains on his back, crying unashamedly. The director, first anxious and then alarmed, reaches out to him.

\”‘Are you all right?\’ he asks. The young actor tries in vain to answer. Finally he says, ‘It is so real. It is so real.\’ The director has to be workmanlike, objective. But in this moment he too falls out of character into a flood of tears and leaves the set for cover. The rest of us stand silent and immobile.\” (Truman Madsen, The Savior, the Sacrament, and Self-Worth, 1999 BYU Women\’s Conference)

The people of early America did not recognize Him at first, but came to know Him intimately. These \”more righteous\” but imperfect people were gathered together and saw a man descending out of heaven. They thought it was an angel. The personage said, \”Behold, I am Jesus Christ, whom the prophets testified shall come into the world.

\”And behold, I am the light and the life of the world; and I have drunk out of that bitter cup which the Father hath given me, and have glorified the Father in taking upon me the sins of the world, in the which I have suffered the will of the Father in all things from the beginning. . .

\”Arise and come forth unto me, that ye may thrust your hands into my side, and also that ye may feel the prints of the nails in my hands and in my feet, that ye may know that I am the God of Israel, and the God of the whole earth, and have been slain for the sins of the world\” (3 Nephi 11:10-11,14).

Jesus will come again. Do we know Him well enough to recognize Him, or will the Savior need to declare Himself to us? With our suspicious nature, will we need to feel the prints in His hands and feet to know it is Him, or will we unashamedly cry because we already know Him and His sacrifice is \”so real?\” Let each of us strive to personally know Him, to be \”more righteous\” in our imperfections, that we may recognize Him—not only when He comes again but in each moment of our lives.