Taking the Time to Touch a Life 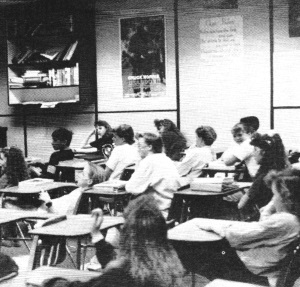 Everyday there are opportunities for us to touch the lives of others.  One such person for me was Catherine.  Years ago, when I was a young teacher, she was a student in one of my classes.  She was a fourteen-year-old young women, perhaps a little plain in some people’s eyes, but had a wonderful spirit hidden behind her somewhat bashful eyes.  She was a good student, and I enjoyed having her in my classroom.

Scott was very different.  Very outgoing and, at least in his own opinion, good looking, he seemed to have no fear of authority and had a talent for manipulation of situations and people.  His standards were not high.  His unwillingness to learn to control his appetites and passions was obvious.  It was also obvious that his mischievousness was leading him, and others, down dangerous paths.

I guess that is why it was such a shock one day to see Catherine walking down the hall with Scott’s arm around her.  Having struggled with being positive about Scott, a sense of uneasiness and fear for Catherine, in her naivety, being manipulated by him, tensed the very muscles of my body.  Over the next week or so I watched Catherine begin to change in subtle ways as her circle of friends changed.  From my observation of Scott in the classroom, I knew where he was headed with Catherine.  I felt I needed to do something to warn Catherine, but how to do it without causing additional problems was a real concern.

I anxiously watched for an opportunity to somehow warn Catherine.  At times, after school was dismissed, I was assigned to stand in the hall to help insure the departure of the students was a little more orderly and safe.  On one such occasion, Catherine and a group of friends came down the hall and stopped to talk to me.  I was worried about her friends saying something, but my concern for her overcame my fear.

I turned to Catherine and said something to the effect, “So, what’s up with you and Scott?”  There were the typical giggles from her friends as she answered my question.  I then said, “You know, Catherine, you are a terrific person and you could do much better than Scott.”  I was surprised at the words coming out of my mouth. Not something I would normally say to a student. “You don’t need to lower your standards for him.”  She looked a little taken back, and her friends were startled as well.  I can’t remember the whole conversation.  It only lasted a couple minutes and then Catherine and her friends bounced down the hall and out of the school building.

The next morning an angry Scott showed up in my classroom.  Catherine had broken up with him, and he had heard from her friends what I had said about him.  It was a bit tense as I explained that I thought it was wrong the way he was manipulating her to get what he wanted.  I was a little worried and I doubt I ever made his favorite teacher list.

A very solemn Catherine came to my my class that day.  I smiled at her as she came into the classroom, and she returned with a small upturn of her own.  At the end of class she walked up and gave me a note and then left my room.  It brought tears to my eyes.  I have kept it these many years because it means so much to me.  Here is part of what she wrote.

“About what you told me about Scott, I’m sure you didn’t think I’d think about it, but I did—a lot! Before I met him I was wonderful . . . but after I met Scott, all that changed and I said something wrong every once in a while.  I even got a dirty mind, listened to bad music, and dropped in grades.  I’m going to try to change but it’s going to be hard.  I’m glad you said that before something happened that would have changed my life.  I lost my reputation as a goody two shoes because something happened that I made myself promise would never ever happen and it did.  Church doesn’t seem as important and neither does family, but all this will change too.  I want to thank you again . . . I can start out a new year great once again.  Please, if you ever see this happen to me again or to anyone else for that matter, try to change it.  Catherine
P.S. Out of everyone in the school lots of people might be going through the same thing.  Why did you care enough about me to say something.  I’m just an 8th grader that will leave to high school and probably never see you again.  Thanks again!”

The Prophet Joseph said, “Nothing is so much calculated to lead people to forsake sin as to take them by the hand, and watch over them with tenderness.  When persons manifest the least kindness and love to me, O what power it has over my mind” (Teachings of the Prophet Joseph Smith, p. 240).

On another occasion, Joseph stated, “Friendship is one of the grand fundamental principles of ‘Mormonism’; [it is designed] to revolutionize and civilize the world, and cause wars and contentions to cease and men to become friends and brothers. . . . It is a time-honored adage that love begets love.  Let us pour forth love—show forth our kindness unto all mankind, and the Lord will reward us with everlasting increase. . . . Friendship is like Brother Turley in his blacksmith shop welding iron to iron; it unites the human family with its happy influence” (Teachings of the Prophet Joseph Smith, p. 316).

From Liberty Jail, Joseph Smith wrote, “How sweet the voice of a friend is; one token of friendship from any source whatever awakens and calls into action every sympathetic feeling; it brings up in an instant everything that is passed; it seizes the present with the avidity of lightning; it grasps after the future with the fierceness of a tiger; it moves the mind backward and forward, from one thing to another, until finally all enmity, malice and hatred, and past differences, misunderstandings and mismanagements are slain victorious at the feet of hope” (Teachings of the Prophet Joseph Smith, p. 134).

Love is one of the chief characteristics of the Father and Jesus.  (Lectures on Faith, p. 35.)  If we desire to become like our Father in Heaven, to return and dwell with Him in His presence, then we must cultivate love within our own lives, within our families, and within our associations with others.  Small acts of caring, a few kinds words of love, can “revolutionize” the world. But more importantly, it can “revolutionize” our own lives and the lives of those we may influence.  May each of us desire to be more like our Savior and learn to “live together in love.”