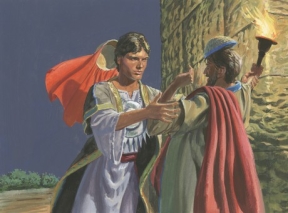 The story of Nephi and his brothers returning to Jerusalem to obtain the plates of Laban has always been a favorite of mine.  From Nephi’s faith filled declaration that he would “go and do the things which the Lord hath commanded” (1 Nephi 3:7), to his presentation on Moses to strengthen the doubt-filled faith of his brothers (1 Nephi 4:2-3), and his motivated faith being “led by the Spirit, not knowing beforehand the things which I should do” (1 Nephi 4:6), ending with his killing of Laban and his triumphant return to his family in the wilderness.  This scriptural account teaches us step-by-step how the Spirit can direct the life of someone filled with Christ-like faith.  However, in my last reading of this account my thoughts were directed to Zoram.

Zoram, the faithful servant of Laban.  Here was a man trusted with the keys of Laban’s treasury, a man obviously trusted by the worldly and wealthy Laban.  He also was apparently a kind and friendly person considering his conversation with the “Laban clad” Nephi concerning the “brethren of the church” and the evenings events.  When he realizes it is Nephi, and not Laban, who had ordered him without the walls, he trembled with fear and was about to flee into the city when Nephi stopped him.  I am sure this faithful and trusted man stood there wondering what he had done, what would become of him, would he be killed, and how this could have happened.

But he also had ears to hear as he listened to the words of Nephi, and the Spirit calmed him.  With an oath, “as the Lord liveth” (1 Nephi 4:32), Nephi promised Zoram his life would be spared.  They were not thieves that used him to get to the plates only to then kill him once outside the city walls.

A calmed Zoram then listened to Nephi’s explanation of their purpose in obtaining the plates saying “Surely the Lord hath commanded us to do this thing.”  Also, Nephi promised Zoram that he would be a free man, not their servant, if he went with them.  The Spirit touched Zoram’s heart and he “did take courage” at the words of Nephi and took an oath that he would go with them to live in the wilderness.  “When Zoram had made an oath unto us, our fears did cease concerning him” (1 Nephi 4:37).

We later learn that Zoram married the eldest daughter of Ishmael (1 Nephi 16:7) and had a family that he raised in righteousness.  The bond between this newly freed man and the man who welcomed him into their family grew in strength.  Zoram would have been present when Lehi and Nephi shared their dreams of the Tree of Life, traveled with the family across the desert, and helped build the ship that would take them to the Promised Land.

Lehi, at the end of his life, blessed his children and Zoram saying, “thou hast been brought out of the land of Jerusalem, and I know that thou art a true friend unto my son, Nephi, forever.  Wherefore, because thou hast been faithful thy seed shall be blessed with his seed” (2 Nephi 1:30-32).

The bond between Nephi and Zoram may have been tested at the time Lehi’s family split into two groups.  Zoram’s wife, being a daughter of Ishmael, may have been torn at the thought of leaving her siblings influenced by Laman and Lemuel.  However, the faith and bonds between the two families of Nephi and Zoram was strong and Nephi would record, “I Nephi, did take my family, and also Zoram and his family . . . and all those who would go with me were those who believed in the warnings and the revelations of God” (2 Nephi 5:6), and they left their comfortable homes and went into the wilderness again.

The blessings promised Zoram for his righteousness, friendship, and loyalty to Nephi, were fulfilled, when generations later, as the Nephite nation was about to be destroyed, we find Zoramites listed among the righteous (Mormon 1:8), and in the latter days, when the Lord promises the descendants Zoram that they will come to a knowledge of the Savior through the testimony of their fathers recorded in the Book of Mormon (Doctrine and Covenants 3:16-17).

The message I took from the story of Zoram is one of inclusion, love, and loyalty.  Nephi could have forced Zoram to be his slave as he had killed Laban.  The four brothers could have tied up Zoram and forced him to go with them.  Zoram could have made an oath not to tell the authorities who killed Laban and they could have let him go.  Imagine the surprise of Lehi when more than the plates arrived at his tent.  What if Lehi’s family had not welcomed Zoram into their circle?  What if Zoram broke his promise and returned back to Jerusalem to become a hero by informing the authorities where Laban’s killer was?  There are so many variables that could have happened that didn’t.  The question is why?

First, Zoram must have been a humble, righteous person.  He was willing to allow the Spirit to testify to him that what Nephi was telling him was true.  He, in a way, became a convert to the truth.  Had he not been willing to listen and learn, the story would have been much different.  Remember what happened to Laban when he stood in the way of the plates.

Second, Nephi and his brothers were willing to invite Zoram into their circle of fellowship—even though it was a rocky fellowship.  They expressed their trust of Zoram and treated him as an equal, not as a slave or the so-called “new comer” to the group.  He became one of them, on the same journey of life—or at least from Jerusalem.

Third, Lehi and his family welcomed Zoram with open arms.  Lehi and Sariah recognized the friendship developing between Nephi and Zoram as a good thing.  Lehi knew being Nephi wasn’t easy and I am sure he found a hope and satisfaction in their relationship.  I am sure that there were many times when Nephi’s confidence and faith were strengthened through his relationship with Zoram.

Fourth, Zoram returned the love and loyalty that he received from Nephi and his family.  He could have easily turned back, complained and whined, and developed a dislike for Lehi’s family and their occasional dysfunction.  He could have allowed a grudge or unkind word grow into anger and frustration.  But in his imperfections, he allowed the Spirit into his life to heal, and he accepted the atonement of Jesus as a future reality.

Today we have many opportunities to welcome Zorams into our lives.  There is the new convert joining the Church, the new family moving into the ward, the new spouse to a sibling. There are always new hurts to heal and actions to be overlooked.  We are both Nephi and Zoram in our day-to-day relationships—willing to include others and also being willing to be included—both to love and to be loved, to be loyal and trustworthy.

Elder Henry B. Eyring taught, “All of us need true friends to love us, to listen to us, to show us the way, and to testify of truth to us so that we may retain the companionship of the Holy Ghost.  You must be such a true friend” (Ensign, May 2002, p. 29).