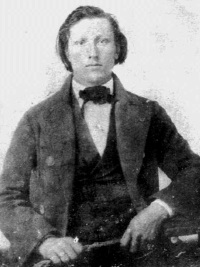 Almost twenty years ago, when I was editor of the Mormon Town website, I was asked why our web site was called “Mormon Town” as we are not “Mormons,” but Latter-day Saints, members of The Church of Jesus Christ of Latter-day Saints.  I wasn’t sure how to answer the question.  Am I a “Mormon,” or should I stress the true name of the Church?  How should I respond when I am called a “Mormon” or asked about the “Mormon Church?”  The question was valid and needed answering within my own mind as much as I needed to answer the man who asked the question.

On September 27, 1854, Joseph F. Smith arrived in Hawaii to begin his mission.  His call was announced at April Conference earlier that year and even though he was only fifteen, he “cheerfully responded” to his call.  Now, six weeks before he turned sixteen, he was on the island of Maui by himself to live among the people, learn their language, and teach them the gospel.  During his four years as a missionary, he presided over branches of the Church and the missionary work on several islands, serving the Lord with faith and courage.

In the fall of 1857, the now nineteen year-old young man was headed home to Salt Lake City, Utah, returning with honor.  He wrote, “In southern California, just after the little train of wagons had traveled only a short distance and made their camp, several anti-‘Mormon’ toughs rode into the camp on horseback, cursing and swearing and threatening what they would do to the ‘Mormons.’  Joseph, gathering wood outside of camp, saw the commotion and some of his fellow travelers hiding in the brush near the creek.  He thought, “Shall I run from these fellows?  Why should I fear them?”

Even though his father, Hyrum Smith, had been killed by the mob at Carthage Jail, Joseph had the courage of testimony and Spirit.  With his arms full of wood, he marched up to the campfire where one of the ruffians stood with pistol in hand.  Amongst the cursing and yelling, he turned to Joseph and said, “Are you a “Mormon.”

My thoughts went to my younger years when I was the age of Joseph F. Smith and experiencing the joys and sorrows of high school.  Living in Nauvoo at that time of my life provided many opportunities to hear the dreaded word—“Mormon.”  I must admit that most of the students at Nauvoo-Colusa High School really didn’t care if I was a Mormon or not.  However, they knew my standards and expected me to live up to them.  For example, the small group of friends that I spent time with outside of school was a collection of several faiths—Lutheran, Baptist, RLDS, Methodist, etc.  It was a great group of friends, and I shall never forget their friendship.  We were all pretty straight and avoided the parties where inappropriate activities took place.  However, near the end of our senior year, a party was held at one of the young lady’s homes where a few extra people were invited.  One chose to bring alcohol.  As I walked into the house, a can of beer flew across the room at me giving no choice but to catch it.  “Here, have a drink.”  I looked at the can wondering why our group was being subjected to an outside influence.  “Naw, not thirsty,” as I threw it back.  Years later I was reminded of that event by one of those who were there.  I asked what would have happened if I had kept it and drank it.  “Oh, we knew you wouldn’t, you were a good ‘Mormon.’”

It wasn’t, and it isn’t, easy to live the standards of the Church.  But as a teen, I was pleased to wear the name “Mormon.”  On my mission, I answered to “Mormon” many times and was honored to do so.  It gave me the opportunity to explain, to those who asked, that “Mormon” was just a nickname given to us by those who disliked us in years past.  The real name of the Church was The Church of Jesus Christ of Latter-day Saints.  The name “Mormon” comes from our belief that The Book of Mormon is a book of scripture, like the Bible, that testifies that Jesus is the Christ, the Savior of the World.  I would then share with them who Mormon was, what he accomplished, and the promise written by his son Moroni that they too could know for themselves that The Book of Mormon was indeed the word of God.  “Mormons” are known through out the world as outstanding Christian men and women.  Those who have gone before have so lived that the name “Mormon” stands for something.  It is our responsibility to carry on and build on their foundation.

I am not ashamed of the name “Mormon.”  It gives me the opportunity to stand for something—The Church of Jesus Christ of Latter-day Saints and the gospel it teaches.  Whereas it was given to us in the spirit of hate and persecution, it has become a symbol of a life dedicated to righteous principles and Christian living.  We invite all people to come to know Christ as their Savior through the writings compiled by “Mormon.”  There is not a greater witness of the living Christ than The Book of Mormon.  It is the second witness to the truths of the Bible.  With the confirmation of the Spirit, testimonies of Christ are strengthened through this wonderful book that carries Mormon’s name.

After this article had been written and sent to the Mormon Town email list, I received several comments in return. One Sister wrote, “Exactly!!!  As I was growing up, I was privileged to know several ‘good Mormon’ families.  The example they set endeared me to the name \”Mormons\”.  When the missionaries finally came to my house six years ago, I had nothing but respect for the people known as Mormons.  I was willing to listen to their message, and was baptized after the 6th discussion.  I am eternally grateful for members of The Church of Jesus Christ of Latter Day Saints that lived their religion.  I too, am not ashamed of the name \”Mormon\” for it is an honor to be among my brothers and sisters in the Gospel, those that came before and those living today!  Sincerely, Sherry Chiles, Colorado”

Another response was, “Your article about being a true blue Mormon touched my heart.  Soon after joining the church I was talking with some co-workers.  In the midst of conversation I had the opportunity to profess my religious stand.  I didn\’t choose LDS but I chose to use the title Mormon.  The very humble difficult beginnings of the church carried with it this brand (even though we also regard ourselves as LDS) a brand that we should bear proudly.  It sets us apart from others in many respects and we are now viewed as God loving, caring and excellent role models in a world that lacks these characteristics.  I just wanted to share with you the warmth that professing my faith has given me.  From this strength I draw added excitement about our church.  God Bless,  Jerry & Rhonda Durant\”

May we all honor the name of “Mormon” and take every opportunity in conversation and in example to share our testimony of what it means to be a “Mormon” and our witness of the living Jesus Christ.