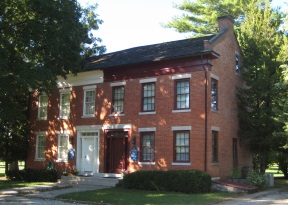 Sometimes we don’t understand or see the hand of God in our lives as we go about our day to day life. But as we grow older we begin to see and recognize His hand in events of the past. For me, one experience as a young nineteen-year-old, has caused to do just that.

The summer of 1980 I was working with my father for the Temples and Special Projects division of the Church Building Department in Nauvoo, Illinois. We were restoring the exterior of the Ashby-Snow duplex and preparing the interior for two missionary couples to live in as a modern updated home. I was either waiting for, or had just received, my mission call when this story took place.

The roof was sagging after so many years (about 138 years), so one of the major repairs to the exterior was the removal of the old roofing materials and the adding of 2×12\’s to each rafter, as well as the center beam, that would strengthen and straighten the roof lines. After the rafters had been strengthened, new plywood was placed to cover the roof.

The brick layers then came in and rebuilt the brick walls above the roof line so it would look like the old Mormon style homes in 1840\’s Nauvoo. They had been removed in a previous remodel, probably for water leaking reasons, and now in the restoration process, they were being returned to their original design.

Kent Powell and I were then working on the roof to prepare it for the new wooded shakes to be placed as shingles. To measure the roof, I needed to walk across the roof at the peak to get to the north side of the house. I had a tape measure in my gloved hands as I was walking across the roof, when at about the half way point, the sand from the brick layers on new plywood resulted in me finding myself sitting on my backside and me sliding down the steep roof at a fine rate of speed.

I put my hands out to try and stop my descent, but to no avail. I slid down the roof so fast I didn’t really have time to think about what was about to happen except to realize I was going to fall to the ground two stories below.

As my feet went over the edge, I came to a complete stop, sitting on the edge of the roof. I looked down and my feet had landed in the center of a single 2×12 plank across the scaffolding that had been put up when we were working on putting up the new rafters and plywood. Two stories below were the new stone steps that had been put in place just a week or so previously.

Kent, who was next to the new brick on the south end of the roof, asked if I was okay and I turned and looked up at him and said, “yes.” My dad then walked out of the front door of the Ashby side of the house and looked up at me. He asked if I was okay, and I turned and looked down at him and told him, “yes.” He then said, “We’re not going to tell your mother, are we.” I said, “No,. We both knew that if I did, my job working with him would end. After catching my breath, I stood up on the plank and walked across to the north side of the roof and we went back to work to measure the roof—albeit slower and more careful.

If that plank hadn’t have been there I would have fallen two stories down to the stone front steps of the house and would have either been killed or terribly injured, perhaps with a lifetime of physical or mental disabilities. All three possibilities could have been part of Heavenly Father’s will and plan as part of my life experience. However, on this day, a small miracle took place and a plank saved my life. Whether it was because I was going on a mission or not, I don’t know. I just know on that day my life was spared and now, after nearly 40 years, I am able to bear witness of the tender mercies and miracles of the Lord.

My mother wasn’t told and never knew of the story until about 20 years later when I was telling this story as part of a fireside for my ward on my experiences as a youth living in Nauvoo. I was to the part where I was sliding down the roof when I looked over at my mother and realized from the look on her face she had never heard this story. I stopped, and said, “You’ve never heard this story, have you?” She shook her head no. The class laughed. and I apologized to her and then finished the story. She told me later it was a good thing she hadn’t been told.

So that is the story of my experience of almost being killed working on the Ashby-Snow Duplex in 1980, and my testimony of the Lord’s hand in our life. We don’t always know or understand why some things happen, why someone dies and someone else lives, but the scriptures are filled with the encouragement to Trust in God. For example, in Alma 5:13 it reads: “And behold, he preached the word unto your fathers, and a mighty change was also wrought in their hearts, and they humbled themselves and put their trust in the true and living God. And behold, they were faithful until the end; therefore they were saved.”

It is difficult sometimes to Trust in God when we are unable to see the whole picture before us, but, the day will come when we will understand why things happened the way they did. With that hope we continue to trust in God and try our best to be faithful until the end and be saved.