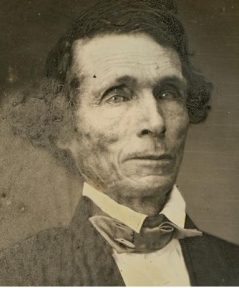 The life story of William W. Phelps is one of faith, despair, forgiveness, and love.  It is one of the most wonderful stories of the Restoration and early history of the Church, and well worth reviewing.  The material for this newsletter is partially taken from the book, Praise to the Man, by Larry Barkdull, a fictional account of an interview with W. W. Phelps.

“While employed as a newspaper editor, William had settled with his wife, Sally, and their young family in Canandaigua, New York, just eleven miles from Manchester, the family home of Joseph Smith Jr.  It was there that the Phelpses were residing when young Joseph received the golden plates in 1827\” (Praise to the Man, p. 16).

“In 1823, the same year Joseph Smith had first gone to the hill to see the plates, the Lord prompted me in a dream to believe in the discovery of ancient gold plates, which would contain more plainness than the Bible. . . Then, in March 26, 1830, I read in the Wayne Sentinel from Palmyra, just twelve miles away, that The Book of Mormon had been printed by Egbert B. Grandin, and was now for sale.  On the 9th of April, I bought a copy of the Book of Mormon and sat up that night with Sally reading it and comparing its teachings with those of the Bible. . . By December 1830, I could stay away no longer.  I sought out Joseph Smith on Christmas Eve day at the home of Peter Whitmer Sr. in nearby Fayette, located about eighteen miles east of Canandaiguq.  My faith increased . . . when I, for the first time, held a conversation with our beloved brother Joseph, whom I was willing to acknowledge as a prophet of the Lord” (Praise, p. 17).

W. W. Phelps moved to Kirtland, Ohio after suffering persecution for his new faith in New York.  After asking Joseph the will of the Lord for him, Section 55 of the Doctrine and Covenants was received.  Other revelations would follow, including a call for William to be a printer in the land of Zion—Independence, Missouri.  It was in Missouri that Brother Phelps would experience his greatest challenges.  He was a leader of the Church in Missouri and publisher of The Evening and Morning Star.  He was one of Joseph Smith’s closest friends and confidants.  However, land speculation and pride entered his heart.  By March 10th, 1838, W. W. Phelps was stripped of his call to the presidency of the Church in Missouri and excommunicated.

“Once excommunicated, John Whitmer and I began to fight against the Saints, stirring up opposition, urging lawsuits, spreading rumors, publishing slanderous reports, and generally fueling the anger of the mobs.  On July 8th 1838, the Lord, through a revelation given to the Prophet, gave me a chance to repent.  But I refused.  I continued my public venting, and on October 27th, Governor Boggs issued his extermination order, demanding that all Mormons leave the state or be killed. . . . I calculated my revenge and actively campaigned against the people of God and the Prophet.  Did I cause all the troubles? No, it would be vain to say so.  But I contributed.  Governor Boggs issued his extermination order, and I applauded” (Praise, p. 99-100).  “I was a Judas, don’t you see?  When the Prophet was tried in court, I testified against him.  I wrote a condemning affidavit to the court, and I signed it. . . . Largely based upon my actions and testimony . . . Joseph Smith and others were imprisoned in Liberty Jail” (Praise, p. 103-104).

William moved his family to Dayton, Ohio in early 1840 when he met Elders Orson Hyde and John Page who were passing through Dayton on their mission to Palestine.  They encouraged him to write to Joseph asking him to forgive him.  William gathered his courage and wrote Joseph. “I know my situation, you know it, and God knows it, and I want to be saved if my friends will help me. . . I have done wrong and I am sorry. . . . I ask forgiveness in the name of Jesus Christ of all the Saints, for I will do right, God helping me” (Praise, p. 112).  The reply came a short time later.  “Dear Brother Phelps: I must say that it is with no ordinary feelings I endeavor to write a few lines to you in answer to yours . . . truly our hearts were melted into tenderness and compassion when we ascertained your resolves, etc.  I can assure you I feel a disposition to act on your case in a manner that will meet the approbation of Jehovah, (whose servant I am), and agreeable to the principles of truth and righteousness which have been revealed; and inasmuch as long-suffering, patience, and mercy have ever characterized the dealing of our Heavenly Father towards the humble and penitent, I feel disposed to copy the example, cherish the same principles, and by so doing be a savior of my fellow men.  It is true, that we have suffered much in consequence of your behavior . . . when you turned against us. . . . Believing your confession to be real, and your repentance genuine, I shall be happy once again to give you the right hand of fellowship, and rejoice over the returning prodigal. . . . For friends at first, are friends again at last” (Praise, p. 113-117).

William worked to gather enough funds to journey to Nauvoo, Illinois.  Finally he was able to do so and in great poverty, began his journey home.  “One evening, as we plodded along the road that led into Nauvoo, Joseph spied me at a distance.  He left his dinner and ran to greet me.  We fell on each other’s necks and embraced and wept” (Praise, p. 117).

W. W. Phelps wrote a song chosen by Emma Smith and published in the first hymnbook that we often sing to this day: O God, the Eternal Father.  The lyrics, written by W. W. Phelps, reads:

1. O God, th\’Eternal Father,
Who dwells amid the sky,
In Jesus\’ name we ask thee
To bless and sanctify,
If we are pure before thee,
This bread and cup of wine,
That we may all remember
That offering divine–

2. That sacred, holy off\’ring,
By man least understood,
To have our sins remitted
And take his flesh and blood,
That we may ever witness
The suff\’ring of thy Son,
And always have his Spirit
To make our hearts as one.

3. When Jesus, the Anointed,
Descended from above
And gave himself a ransom
To win our souls with love–
With no apparent beauty,
That man should him desire–
He was the promised Savior,
To purify with fire.

4. How infinite that wisdom,
The plan of holiness,
That made salvation perfect
And veiled the Lord in flesh,
To walk upon his footstool
And be like man, almost,
In his exalted station,
And die, or all was lost.

William “remained Joseph’s true friend until the end of the Prophet’s life. . . . he resumed his writing for Joseph and the Church.  He never owned any property in Nauvoo and barely made enough to support his family.  Still, few men living in Nauvoo at that time had a more intimate relationship with the Prophet than did William W. Phelps. . . . William visited Joseph Smith in Carthage Jail early in the morning on the day the Prophet and Hyrum were murdered.  Two days later, it was William W. Phelps who delivered the funeral sermon to over ten thousand grieving souls” (Praise, p. 118-119).  “A few weeks after Joseph’s death, he authored these words . . . Praise to the man who communed with Jehovah! Jesus anointed that Prophet and Seer. Blessed to open the last dispensation, Kings shall extol him, and nations revere” (Praise, p. 120-121).

“After wading through much tribulation, repenting nigh unto death, the Lord in mercy hath seen fit to snatch me out of an everlasting burning, and I am born of God” (Mosiah 27:28).

May we show the same Christ-like love exemplified by Joseph Smith in his relationship with W. W. Phelps to those we associate with.