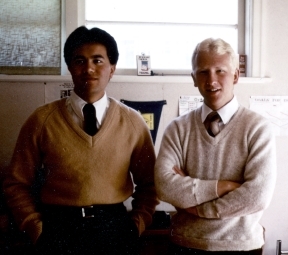 Spring was coming to Wainuiomata, New Zealand. Elder Wihongi and I had not found many friendly faces interested in learning more about the Church. In fact, it had been a long cold winter in several different ways.

For example, there was the night we were on our bikes heading back to our flat. Elder Wihongi was ahead of me as we rode down Wise Street. I was just entering the roundabout when a car with a guy, yelling and hanging out the window, pretended to shoot me with a machine gun and flew by so close it scared me. Elder Wihongi was just far enough ahead of me that he was already through the roundabout. When I came out of the curve onto Moohan Street towards our flat, Elder Wihongi was out of site and the car was swerving back to the center of the road. My heart beat quickened, as the fear that they had hit my companion, gripped me.

There was a car parked along side the road blocking my view so I couldn’t see my companion. As I went around it, my fears seemed confirmed as Elder Wihongi was getting up off the ground and trying to dust himself off. The young man hanging out the window had given him a good push on his back, causing him to roll the bike—with him on it. Luckily he had gloves on or his hands would have been shredded raw meat. Other than a few holes in his pants and being covered in mud, he was physically fine. The bike was a little damaged, and once the shock wore off, we walked the rest of the way home. It was a difficult time for my companion, and like most times of great trail, a time of growth as we work through these moments in our mind and in our heart. In times of trial, the words of the Lord to the Prophet Joseph Smith are peacefully brought to remembrance, “know thou, my son, that all these things shall give thee experience, and shall be for thy good. The Son of Man hath descended below them all. Art thou greater than he? . . . fear not what man can do, for God shall be with you forever and ever” (Doctrine and Covenants 122:7-9).

We had some wonderful members of the Church in Wainuiomata. In fact, I don’t think either Elder Wihongi or myself would have survived those difficult winter months without the support of the good families who lived there. There were the Van Ginkels and the warm cup of Milo on a cold winter night, Sister Maddison and her dryer when our hope of drying clothes on a line in the rain was futile, the Paia’s, Brouwer’s, Matenga’s, Amaru’s, and so many more. We leaned on them heavily during this time, and whether they knew it or not doesn’t matter. Wainuiomata was my home for over seven months, and my understanding of brotherhood and aroha (love) grew tremendously during this time.

Then there was the Clarke family. They don’t come much better or stronger than the Clarkes. They had a daughter, Vicki, that was falling in love with a fine young man who wasn’t a member of the Church. He had invited her to his church several times, and her loving parents were fearful that under the influence of love, she would become inactive in the Church. We had met Sean and he seemed a likeable young man but had no interest whatsoever in the “Mormon religion.” Like all parents who love their children, they prayed, hoped, and sometimes out of love, said things that didn’t necessarily help the situation. However, Vicki did agree to a two-week mini mission in Australia. It has been so many years that I can’t remember all the details of the how and why of Australia; I just remember the results.

As I remember it, when she returned home, Sean and her family met her at the Wellington airport on a Saturday night. She told her parents she was going to ride home with Sean as they had something to talk about. Apparently she told Sean that she knew the Church was true, and that if he cared about her, he would take the time to find that out through prayer for himself. She had him stop the car and pray about it right then and there. The funny thing about it was that Sean was at Church the next morning before just about everyone else, including the Clarkes. I know there were two shocked missionaries that morning, who were more than happy to teach him a “D” discussion during Sunday School. That night in the Clarke home we taught him a “C” discussion. At the end of the discussion he shared with us his “testimony” of the gospel and the story of an answer to prayer. Joy filled our hearts as we once again had witnessed to us that we did not work alone, but that the Spirit was our companion. We were but the teachers of the gospel, and the Spirit was the true converter and testifier. “And it is the Spirit that beareth witness, because the Spirit is truth” (1 John 5:6). I was transferred to Wellington three days later. Sean was baptized a couple of weeks later, and he and Vicki were later married.

As I review these two events of my mission that were just a couple of months apart, it amazes me the variety of experiences life offers to us. Elder Wihongi and I had some very difficult times together as companions, but we also experienced the joy that comes from seeing the light of the gospel glow in the eyes of a new member. How grateful I am for the blessings of a mission and the experiences of Wainuiomata.