What Nephi Did when He Was Forbidden to Say More 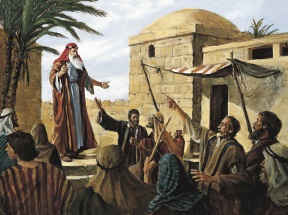 At the point in Nephi’s great vision of the end from the beginning, when the mother of harlots gathers multitudes to fight against the Lamb of God, and God’s wrath is poured out upon her (1 Nephi 14:13–17), Nephi is “forbidden” to write more of what he saw except that he “beheld the power of the Lamb of God, that it descended upon the saints of the church of the Lamb, and upon the covenant people of the Lord, who were scattered upon all the face of the earth; and they were armed with righteousness and with the power of God in great glory” (1 Nephi 14:14, 28).

So as not to seem too obvious of what he does next in relation to his vision, Nephi continues the account of his family’s travels to the land of promise (1 Nephi 15–19). He then quotes in their entirety chapters 48–49 of the Book of Isaiah (1 Nephi 20–21), at which point he follows up where he left off speaking about the wrath of God falling upon the mother of harlots, the power of God intervening to deliver his righteous people, and God’s fulfilling his covenants with the house of Israel—all of which he had discussed earlier (1 Nephi 22:11–17; cf. 1 Nephi 14:13–17).

This time, however, Nephi turns to speaking about God’s baring his arm: “I would, my brethren, that ye should know that all the kindreds of the earth cannot be blessed unless he shall make bare his arm in the eyes of the nations. Wherefore, the Lord God will proceed to make bare his arm in the eyes of all the nations, in bringing about his covenants and his gospel unto those who are of the house of Israel. Wherefore, he will bring them again out of captivity, and they shall be gathered together to the lands of their inheritance” (1 Nephi 22:10–12; emphasis added).

The metaphor of God’s baring his “arm”—a word link to Isaiah 48–49—comes from Isaiah 52: “Jehovah has bared his holy arm in the eyes of all nations, that all ends of the earth may see our God’s salvation” (Isaiah 52:10; emphasis added); “All of you, assemble and hear: Who among you foretold these things? It is him Jehovah loves, who shall perform his will in Babylon; his arm shall be against the Chaldeans. I myself have spoken it, and also called him; I have brought him, and I will prosper his way” (Isaiah 48:14–15; emphasis added; cf. 1 Nephi 20:14–15).

Having thus connected what he said earlier to what he is saying now, Nephi adds, “I durst not speak further as yet concerning these things” (1 Nephi 22:29), echoing what he said before about being “forbidden” to write more (1 Nephi 14:28). Having additionally pointed readers to the words of Isaiah (1 Nephi 19:23–24), Nephi leaves it them to search things out for themselves. All of this raises the question, however, of what Isaiah can tell us that Nephi can’t? Because Isaiah depicts God’s endtime servant as one of two “arms” of God, it evidently has to do with him:

“Listen to me, my people; give heed to me, O my nation: The law shall go forth from me; my precepts shall be a light to the peoples. Then, suddenly, I will act: my righteousness shall be at hand and my salvation proceed; my arms shall judge the peoples—the isles anticipate me, awaiting my arm” (Isaiah 51:4–5). Isaiah’s identifying God’s “arm” called “righteousness” as God’s endtime servant (Isaiah 41:2; 46:11–13) and God’s “arm” called “salvation” as Jehovah God of Israel (Isaiah 33:2; 62:11) portrays one acting as forerunner to the other (Isaiah 52:7–10).

That one, God empowers: “Awake, arise; clothe yourself with power, O arm of Jehovah! Bestir yourself, as in ancient times, as in generations of old. Was it not you who carved up Rahab, you who slew the Dragon? Was it not you who dried up the Sea, the waters of the mighty deep, and made of ocean depths a way by which the redeemed might pass? Let the ransomed of Jehovah return! Let them come singing to Zion, their heads crowned with everlasting joy; let them obtain joy and gladness, and sorrow and sighing flee away” (Isaiah 51:9–11; emphasis added).

As the same angel who led Israel’s exodus out of Egypt (Exodus 14:19–31), God’s servant leads an endtime exodus of God’s people to Zion. The power of God descending upon the saints of the church of the Lamb and upon the covenant people of the Lord who form his endtime Zion thus immediately follows upon God’s empowering his servant to overthrow those who attempt to enslave his people as Pharaoh did in Egypt (1 Nephi 14:13–17): “Awake, arise; clothe yourself with power, O Zion! Put on your robes of glory, O Jerusalem, holy city!” (Isaiah 52:1).

In other words, what Nephi does between the lines—using word links that connect what he said earlier to what he is saying now—is to quote Isaiah to say what he was “forbidden” to say. Knowing that God commands all to search the scriptures, not just him and his people, Nephi cites the two chapters of Isaiah that most reflect the final part of his vision. That being so, what else do the Isaiah chapters teach? They depict in detail the servant’s endtime mission of restoring Israel physically (Isaiah 49:1–26; cf. 1 Nephi 21:1–26) as it gathers in a new exodus to Zion:

“Go forth out of Babylon, flee from Chaldea! Make this announcement with resounding voice; broadcast it to the end of the earth. Say, Jehovah has redeemed his servant Jacob. They thirsted not when he led them through arid places: he caused water to flow for them from the rock; he cleaved the rock and water gushed out” (Isaiah 48:20–21; cf. 1 Nephi 20:20–21). Because the servant himself tells us that God “hid me” and “kept me secret” (Isaiah 49:2; cf. 1 Nephi 21:2)—evidently in order to test his people—Nephi “durst not speak further” about it (1 Nephi 22:29).

For more of Dr. Gileadi’s writings, Visit the Isaiah Institute